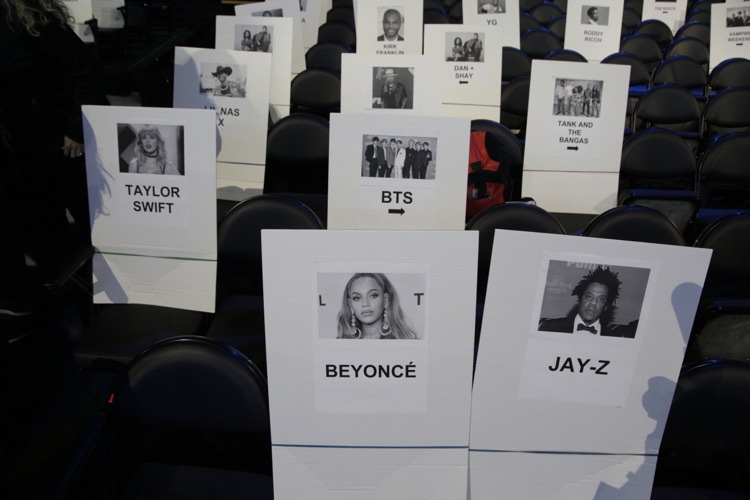 The extremely ugly battle inside the Grammys and Recording Academy scared away three of the music industry’s biggest superstars.

Heading into the week, Digital Music News first reported on rumblings of a possible no-show by marquee guests Beyoncé and Jay-Z.  We also reported on rumors that Taylor Swift was exiting the event, a prediction that was also echoed by Variety.

Now, it’s confirmed that none of these high-wattage superstars attended the event, despite plans for all three to be prominently featured.  Even worse: Beyoncé won an award, but didn’t even show up to accept it.

In a pre-Grammys seating chart shared by CBS (see above), all three stars were slated to appear in highly-visible seats directly in front of the stage.  But just two days ahead of the event, CBS retracted its marquee chart featuring the trio, while noting that its seating arrangements were ‘tentative’.  No other explanation was offered.

Now, we have a better idea of what was happening.

Variety noted that Taylor Swift had not only canceled an appearance at the event, but also bailed on a performance. Last week, a source to Digital Music News noted that Beyoncé and Jay-Z pulled back from the event in response to the nastiness surrounding the firing to Recording Academy CEO Deborah Dugan. The couple may have viewed the situation, which features multiple allegations of misconduct, sexual assault, and outright rape, as something to avoid.

“As you know, as we all know, [Beyoncé] has been working tirelessly throughout her career to promote the kind of empowerment, change, and positivity she believes in, so really, at this point, this is just a question of whether [the Recording Academy situation] will stand in the way of Beyonce’s promoting those messages,” the source told us.

Adding to the pullouts, Grammy host Alicia Keys canceled all pre-event interviews.  But she remained host of the event, despite the problematic associations.

Both Beyoncé and Taylor Swift drew a combined 7 nominations, and Beyoncé won the Grammy Award for Best Music Film for Homecoming.

But Beyonce wasn’t there to accept it. Instead, a representative of the singer quietly picked up the award in a pre-show exchange.

Incidentally, many fans couldn’t help noticing that while the winner of certain Grammys were being announced, the “live-view” shots of Swift and Beyonce were replaced by still images.