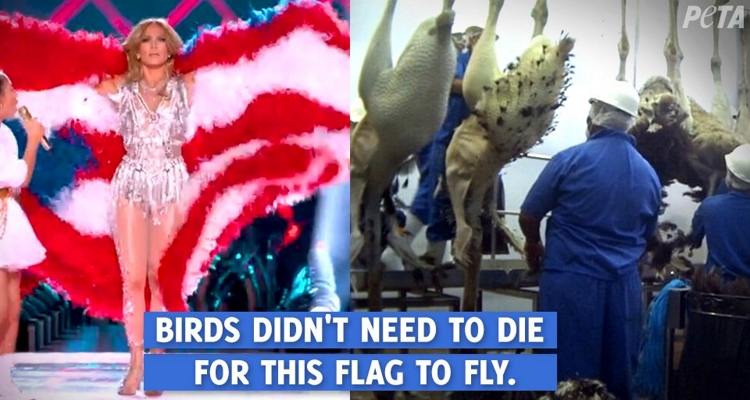 Lopez came onto the stage in a custom bodysuit with a red, white, and blue coat. The coat itself was the Puerto Rican flag. PETA says the fashion choice and statement could have been made without murdering animals.

“This flag could have flown without killing birds,” reads a tweet from the organization. “Dozens of bids were KILLED for this Super Bowl Pepsi Half Time performance.”  The tweet included the image at the head of this article with a side-by-side of birds being butchered and processed.

The feather coat was custom-made by Versace and featured more than 40,000 red, white, and blue feathers. The coat itself depicted the United States stars and bars on one side and Puerto Rico’s flag on the other. Versace’s official Instagram disputes the claim — saying “all feathers used for the flag were sourced ethically.”

Whether the feathers were ‘ethically sourced’ or not, animal rights fans were upset. Many of them blamed J-Lo for being willing to wear the outfit during the performance. “A lot of talent, a lot of empowered women, but it’s useless if you don’t respect animals,” one tweet reads.

The performances included several of the singers’ greatest hits and a subtle nod to U.S. immigration issues. Emme Maribel Muñiz – J-Lo’s 11 year-old daughter – crawled from a cage to perform her song. Several children in cages were shown before Muñiz belted out verses from her mom’s single, “Let’s Get Loud.” The kids in cages later crawled out to join her as a backing choir.

Many fans on social media applauded the two women for the show and bringing attention to the humanitarian crisis. Putting the spotlight on a hot-button issue didn’t go unnoticed, as it shouldn’t — kids are in cages on our Southern border. Perhaps this Jennifer Lopez Super Bowl performance will do more to motivate people to act.