SiriusXM revealed some new information about its subscribers’ growth rate for its satellite service and Pandora.

SiriusXM added 355,000 satellite radio subscribers during Q4 2019. That breakdown includes 341,000 self-pay customers and 14,000 promotional subs. That number is slightly up compared to a year ago, when Sirius added 346,000 new subscribers. SiriusXM ended 2019 with nearly 35 million subscribers – 30 million as self-pay subscribers.

The bad news is that Pandora seems to be shedding subscribers left and right.

Q4 2019 saw a drop of 88,000 subscribers with only 4,000 new paid promotional subs in the same period. That number is up slightly from last year when Pandora lost 85,000 subscribers. B Riley analyst Zack Silver says he believes there are currently 6.45 million Pandora subscribers.

SiriusXM confirms ad revenue at Pandora is up, despite the loss in subscribers. Pandora raked in $348 million in Q4 2019, up from $314 million in 2018. These are the highest figures seen in Pandora’s advertising revenues yet.

Despite the growth in advertising, the drop in users must be starting to hurt. Spotify now has over 113 million paying subscribers across the globe, while Apple Music continues growing. Even Amazon Music and YouTube Music seem to be growing, while Pandora continues to shed paying subscribers.

Other music streaming services may be eating Pandora’s lunch. Sirius has launched podcasts and exclusive content to try to keep Pandora relevant among its competition. Pandora has even launched its own voice assistant support in a bid to remain relevant in the music streaming industry. 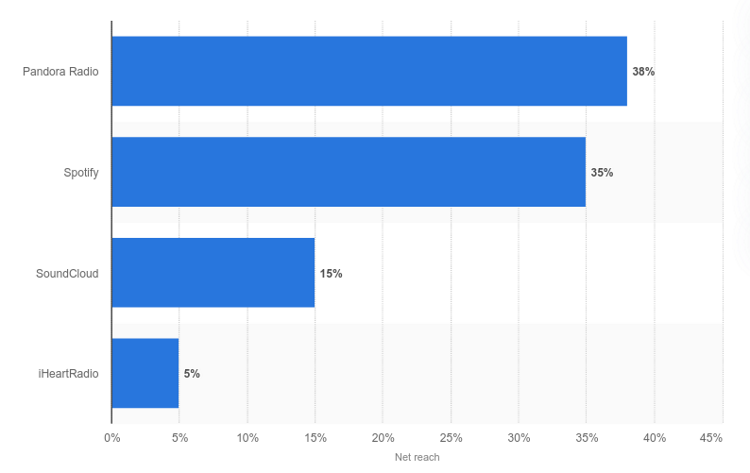 Pandora was the most popular streaming service in the U.S. in June of 2019, according to mobile app reach. But that may not be true for long.

Spotify only followed Pandora’s reach by a 3% margin – and that was over six months ago. Spotify has over 100 million subscribers worldwide, an estimated 34% more than Pandora.