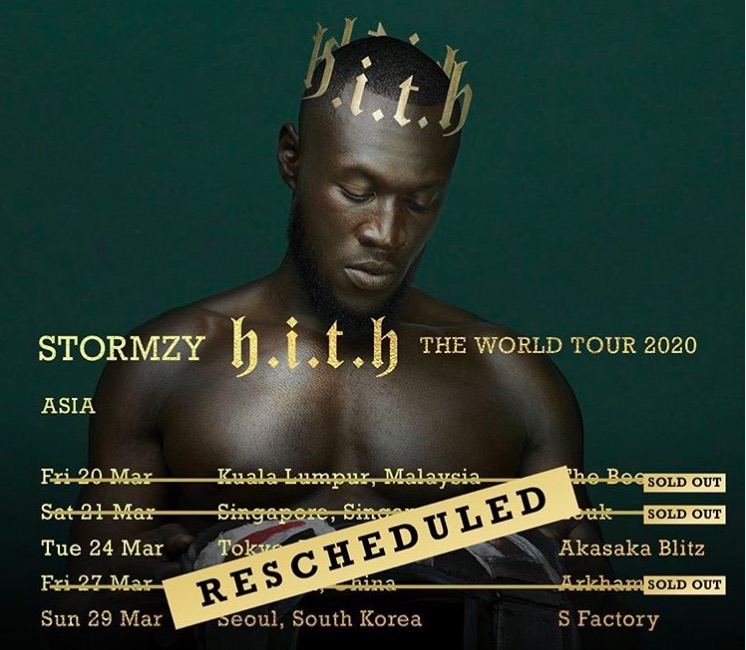 Owing to coronavirus fears, British rapper Stormzy has indefinitely postponed the Asian portion of his Heavy is the Head Tour.

The 26-year-old took to Instagram to reveal the news, which was attributed to “ongoing health and travel concerns.” It was also indicated that these shows will be honored, though new dates — and even a possible window — were not provided. An disappointed Stormzy closed the message by promising fans that he’d be back.

Stormzy was expected to perform in Malaysia on March 20th, before proceeding to Singapore, Japan, Shanghai, Hong Kong, South Korea, and Indonesia. Now, the London native will proceed with the scheduled February 20th show in Berlin, finish his remaining European stops, and enjoy an extended break from official touring duties until heading to Oceania in May.

Earlier this week, it was announced that Stormzy, along with Liam Gallagher and Rage Against the Machine, will headline the Reading and Leeds Festivals, which are scheduled to take place between August 28th and August 30th.

The coronavirus epidemic continues to rage on. Earlier today, Chinese government officials revealed an influx of new infections, bringing the grand (domestic) total to over 60,000 reported coronavirus cases and several thousand deaths. However, some have questioned the authenticity of the figures supplied by the CCP, which has been seemingly unable to thwart the progress of the illness.

Coronavirus sufferers have touched down in Canada, the United States, Australia, and several other non-Asian nations, and U.S. health professionals have instituted mandatory passenger-health screenings for all incoming Chinese flights. Additionally, the World Health Organization (WHO) is closely monitoring the situation.

Experts anticipate that the coronavirus will survive through the year and into the future. Today, California scientists employed by Inovio Pharmaceuticals announced that they’d produced a viable vaccine. Additional testing will be required, but officials hope to begin administering the inoculation as soon as possible.