The most popular concert tickets, tour stops, and artists around the country, based on SeatGeek data through Wednesday, March 4th. 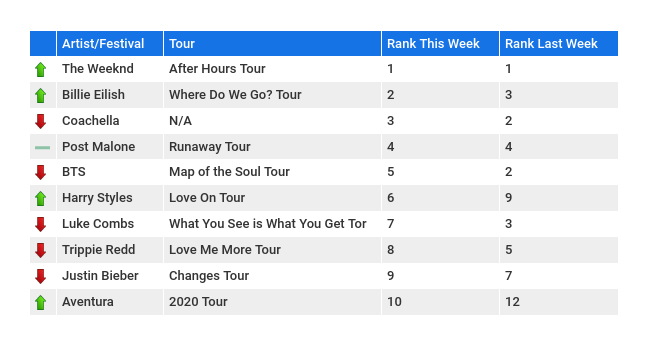 The Weeknd is still riding high from the announcement of his “After Hours Tour.” He’s just added dates to the massive trek, including multi nights in Vancouver, Los Angeles, Miami and Toronto.

Billie Eilish is the queen of the pop world. The young singer’s gigantic “Where Do We Go? Tour” kicks off in Miami on March 9 at the American Airlines Arena and wraps up on April 17 in Omaha at the Centurylink Center Omaha.

Can you believe it’s almost time for Coachella? The 2020 edition takes place next month, including Rage Against the Machine, Travis Scott and Frank Ocean as headliners. It’s official–spring is almost here!

Post Malone continues to truck along on his neverending “Runaway Tour.” Catch the musician in Memphis this Friday.

BTS is gearing up for their big nationwide trek. The fun begins stateside on April 25 in Santa Clara, CA at Levi’s Stadium and wraps up with a two-night stand at Soldier Field in Chicago on June 5 and 6. 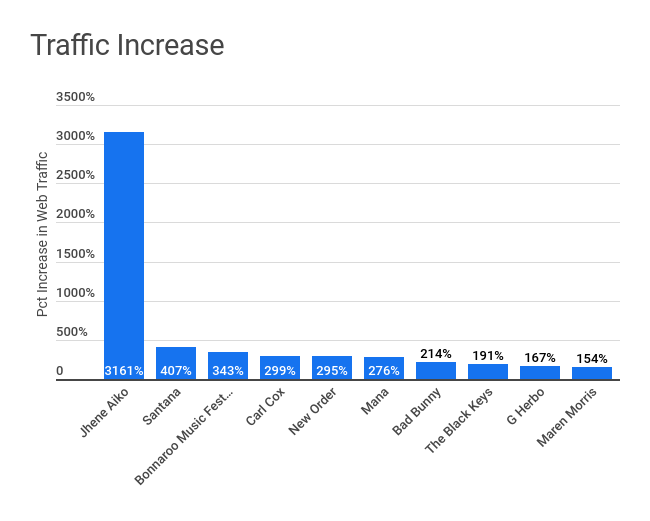 Jhene Aiko has announced dates behind The Magic Hour. The shows are in conjunction with her upcoming album, Chilombo. Catch her starting May 1 in Boston at the Orpheum Theatre, followed by stops in DC, Los Angeles, Orlando, New Orleans, Denver, Seattle, San Francisco and a whole lot more.

Santana and Earth, Wind & Fire are hitting the road this summer for their “Miraculous Supernatural tour.” The fun kicks off on June 19 with a performance at North Island Credit Union Amphitheatre in Chula Vista.

Bonnaroo 2020 is officially sold out. And it’s no wonder why: the headliners include Tool, Tame Impala, Miley Cyrus and Oysterhead. It’s all going down June 11 through June 14 at the Great Stage Park in Manchester, TN.

EDM star Carl Cox will be performing in Chicago, San Diego, Denver, Austin, Houston, Dallas and more starting this weekend. You can also catch him on the lineup at this year’s Ultra Music Festival on March 20 in Miami.

New Order and the Pet Shop Boys are teaming up for a joint trek. The 11-date “Unity Tour” takes place this fall, kicking off on September 5 in Toronto at the Budweiser Stage. Also on the docket are performances in Boston, Philly, NYC, Chicago, Vancouver and San Francisco. 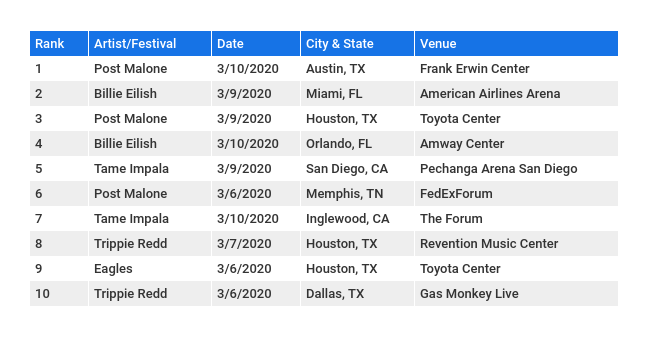 Post Malone is as popular as ever, and the excitement behind his upcoming “Runaway Tour” dates are proof. You can catch him this weekend at the FedExForum in Memphis and at the Frank Erwin Center in Austin, Texas on March 10. The Eagles will take their “Hotel California Tour” to the Toyota Center in Houston, TX on Friday.

As if you didn’t know, Billie Eilish is kicking off her “Where Do We Go? Tour” on March 9 in Miami at the American Airlines Arena, and the following day she’ll be at the Amway Center in Orlando. Tame Impala’s reunion tour is also underway, with stops at San Diego’s Pechanga Arena and The Forum in Inglewood. Trippie Redd finds his way to Dallas on Friday and Houston on Saturday as part of his “Love Me More Tour.”