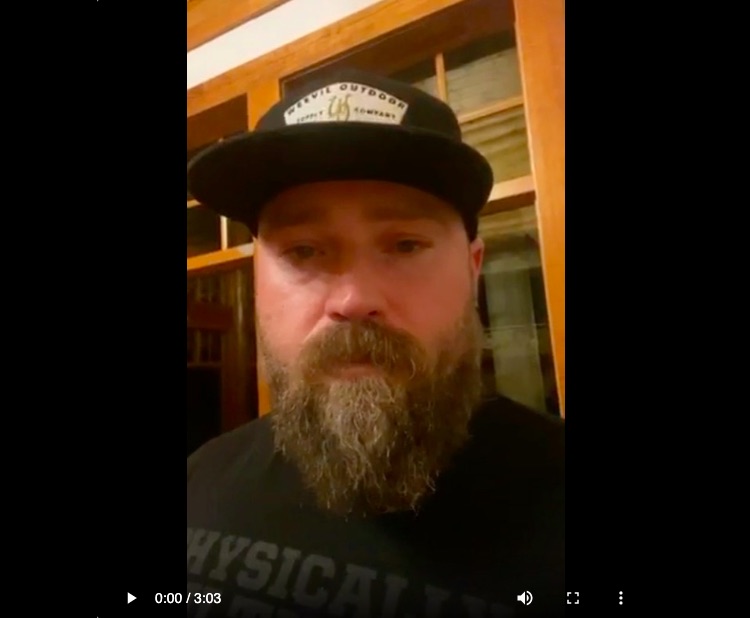 A tearful Zac Brown announces the layoff of 90% of his touring staff.

Canceling mega-events like SXSW was unequivocally the right thing to do — and that’s the consensus after just two weeks of retrospect. Postponing tours has also been judged as highly prudent and responsible. But Zac Brown’s decision to fire his entire touring support team — and his reasons for doing so — raise a very scary question about the longer-term future of the touring space.

Yesterday, we reported on an emotionally-crushed and crying Zac Brown. The oft-upbeat country singer posted an Instagram video announcing that he’d just fired 90% of his touring team. People he’d worked with for twelve years or more. All of which raises an extremely troubling question: just when does Zac Brown think it’s going to be safe to tour again?

As Live Nation’s stock enters an extremely turbulent tailspin — complemented by a small recovery, it should be noted — Wall Street is wondering the same thing.  As is every other artist whose livelihood depends on hitting the road and playing in front of densely-packed crowds.  But Zac Brown’s read of the situation seems far more dire than anything we’ve seen so far.

Zac Brown is one of the artists on the front lines of this crisis. Hopefully, he’s more financially insulated than most artists, but he’s also more knowledgeable of the financial pressures that accompany tours — especially those involving large musical groups, of which Zac Brown Band certainly qualifies.

Tellingly, Brown made the extreme decision to effectively turn off his touring machine. That’s a very serious move, and one that isn’t easily reversed. People who are fired aren’t always available when you need them back. Maybe they’ve moved, entered new careers, or simply hate the fact that they were fired and won’t return. It’s like shutting down the engine of an old car in sub-zero temperatures to save gas. Firing it all back up isn’t so easy.

Accordingly, Brown’s drastic move suggests that the singer anticipates a long freeze ahead.

Previously, Live Nation, AEG, and others had temporarily suspended all tours until at least the end of March. Theoretically, this implies a best-case scenario in which some touring resumes April 1st. Add another month and things start back on May 1st — also not so bad. Elsewhere, mega-festivals like Coachella have pushed their events several months out, until fall. That’s a differential of a few months, though both timetables presume that once the dust settles, the touring train will start rolling again.

Unfortunately, Zac Brown doesn’t seem to agree with that cautious optimism. Clearly, he isn’t preparing to play some rescheduled dates in May — otherwise, he’d keep his staff on life-support for 45 days.

Zac Brown’s been touring for 12+ years — pretty much since the 2008 economic meltdown. Back then, ‘Zac Brown Band’ wasn’t a widely-known name; it was a fledging, expensive and risky touring proposition. There wasn’t a baked-in crowd that knew all the words, supporting an entire touring troupe. But now that Zac Brown has built this up, it’s no good if nobody can leave the house.

The difficult question is whether complete government inaction and ineptitude in the early stages of the COVID-19 onset is effectively wiping out concert touring for the foreseeable future.

This morning, Madonna put President Trump on blast for obvious reasons.  But Zac Brown also spent a large portion of his announcement slamming the broader U.S. Government’s glaring non-response and denial of the issue.  In fact, it seemed to be the prevailing reason for Brown’s difficult decision.

Here’s what he said.

“We’re late to the game. I’m pretty ashamed of how our leadership has handled all of this, I’m pretty ashamed of a lot of things. We can’t rely on our government to tell our people what they need to do. You can read between the lines, you can read all the articles of this happening from all around the world, and we’re less protected than a lot of those countries. Because no one can tell us what to do. We have to decide for ourselves as Americans, and we have to look out for our future, for all of our jobs, for the economy, and for each other. So, I love to spread music, and spread love, and song, and share music with the world — I’m going to do my best to do that from behind closed doors. But if we’re going to heal from this and get back to doing what we were doing before this hit, then everyone’s got to take this seriously.”

Guess it’s a good time to be a lo-fi beats producer with great Spotify playlist support.  Hey, there’s little-to-no name recognition in that game, but there is a paycheck and far lower overhead.  And more importantly, the entire job is all about ‘isolation’. Unfortunately, only a handful of producers enjoy that luxury right now.

But if there’s any consolation here, it’s that streaming is emerging as a viable alternative for at least some artists.

Yesterday, we reported that Twitch streams are booming — and artists are taking advantage of a ready-made payment platform.  Others are jumping into the live-streaming game, with Diplo, Ultra, and SiriusXM already bringing their shows online.  We’ll have a lot more coverage of all of these developments in the coming days, though overall streaming volumes already appear to be surging.

Which means that even if the road is canceled, at least some of the slack can be picked up online. Even for amazing in-person shows like Zac Brown’s.