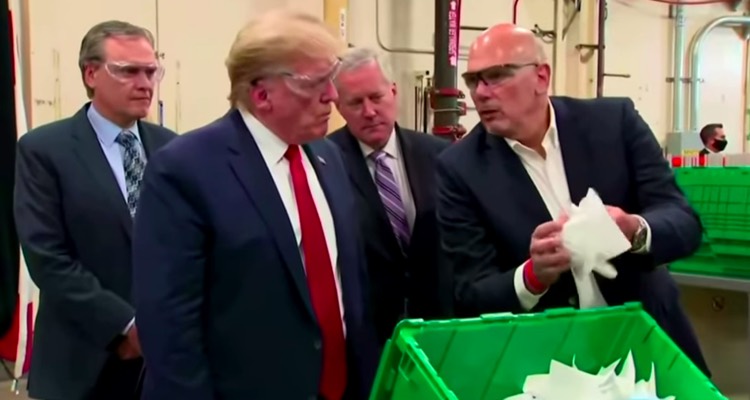 Donald Trump viewing protective masks at the Honeywell factory in Arizona on Tuesday, May 5th.

Donald Trump’s recent tour of a mask production facility in Arizona got an unexpected soundtrack from factory employees.

Protests come in all shapes and sizes — including non-violent ‘adjustments’ of loudspeaker volume knobs.  Accordingly, the Guns n’ Roses remake of “Live & Let Die” was blaring while Donald Trump received a tour of the Honeywell N95 mask-making facility in Phoenix, Arizona (see video below).  Alongside other factory noise, the high-volume track made it difficult for Trump to hear anything being explained — or to conduct any normal discussions —which was probably part of the intent.

The message registered loud-and-clear.  After a period of lockdowns, Trump is actively encouraging governors to open their states despite surging cases of coronavirus infections and resulting deaths. Most states still lack the necessary testing kits to adequately assess the rate of infection, while protective gear, respirators, and other critical equipment have perpetually been in short supply.

Ironically, though not surprisingly, Trump refused to wear a mask to the mask-production facility, though he did wear protective goggles.

Honeywell indicated that masks are required at the factory, though neither Trump nor any of his aides were wearing the protective gear. While yelling to communicate with factory workers, Trump was breathing over a bin of masks, which raised the absurdity of the situation a notch further.

Earlier, Vice President Mike Pence refused to wear a protective mask at the Mayo Clinic, despite a firm policy by the Clinic to wear masks at all times to prevent transmission of the coronavirus. Pence later indicated that he decided against wearing a mask to a hospital treating COVID-19 because he wanted to look people “in the eye.”

As for the President, Trump later indicated that he indeed was wearing a mask — just not during any recorded portion of the visit. “I had a mask on for a period of time,” Trump said back in Washington. “I had it on back — backstage. But they said you didn’t need it, so, I didn’t need it. And by the way, if you noticed, nobody else had it on that was in the group.”

The Guns n’ Roses remake came out in 1991, after originally being released by Paul McCartney in 1973 for the James Bond movie of the same name.