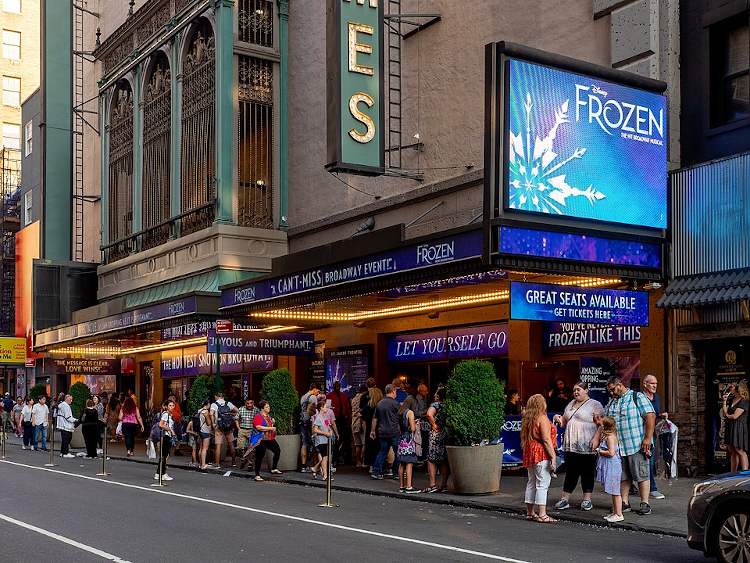 Having been “put on ice” back in March during the novel coronavirus’s domestic onset, “Frozen the Musical” has officially ended its Broadway run, according to Disney.

In explaining the decision, executives from the animation giant’s theater division cited the fiscal implications of having three Broadway performances running simultaneously – “Aladdin” and “The Lion King” are expected to continue showing post-shutdown.

Additionally, despite the stellar box-office results turned in by its namesake film, “Frozen the Musical” reportedly sold fewer tickets (overall and on a weekly basis) than its Broadway counterparts.

“Frozen the Musical” opened on Broadway back in 2018 and ran exactly 851 shows at the St. James Theatre, the last of which took place on March 11th of this year. Presently, it’s unclear which play the Theatre will host next; The Beatles-inspired “Let it Be” and Green Day’s “American Idiot” are among the high-profile works that have been shown at the venue in the past.

The Broadway League revealed in an update this week that the “ongoing suspension” of performances will continue “until further notice,” before expanding the ticketing refund/exchange window to include events scheduled through September 6th.

Addressing the prospects of reopening in a statement, Broadway League President Charlotte St. Martin said: “While all Broadway shows would love to resume performances as soon as possible, we need to ensure the health and well-being of everyone who comes to the theatre. Throughout this challenging time, we have been in close communication with Governor Cuomo’s office and are grateful for his support and leadership as we work together to bring back this vital part of New York City’s economy – and spirit.”

Yesterday, New York Governor Andrew Cuomo extended his state’s stay-at-home order through June 13th. As of late, the Empire State’s 56th governor has detailed “phase one” reopening plans for several regions. New York, along with most other states and many countries, is taking preliminary steps to resume semi-normal operations.

To date, New York has reported the most COVID-19 cases of any U.S. state, with approximately 343,000 of its citizens testing positive for the disease. North of 189,000 of these infections have derived from New York City.