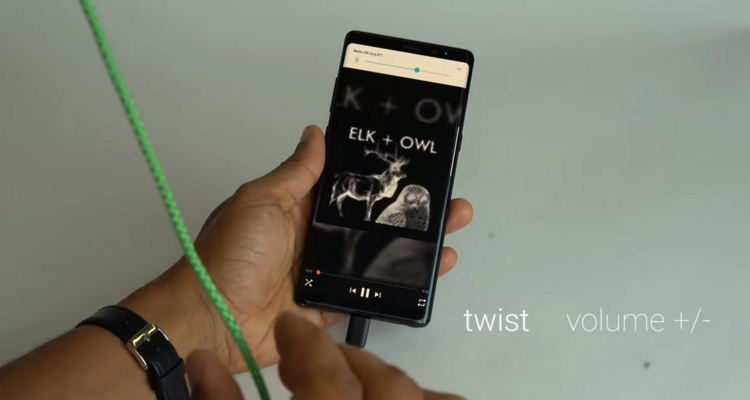 Google is experimenting with music control gestures on smart braided wires — when most other manufacturers are pushing wireless.

Google isn’t a stranger to experimenting with smart textiles. The tech company partnered with Levis to release a smart jacket that can answer calls, play music, and take photos. Now Google is experimenting with ways to make wires on headphones useful.

Google’s I/O braid lets users control their smartphone with gestures like pinching, patting, squeezing, or swiping the cord. Google says the cord uses a helical sensing matrix (HSM) to register each of these gestures individually. Capacitive and conductive yarns are woven into the braid for 360 degrees of gesture visibility.

That means that no matter where you touch Google’s smart braided wires, you can register gesture inputs.

Google is careful to point out that the technology is still very experimental at this point. Still, the hope is that it could be integrated into consumer electronics. Imagine being able to tug on your hoodie string a certain way to control the smartphone in your pocket. That’s the future Google is working on here.

Google collected data from volunteers who were asked to interact with the smart braided wires. They trained a machine learning model to distinguish between most gestures people used while holding the wire. Google says its algorithm can distinguish between gestures like swiping, pinching, squeezing, and twisting with 94% accuracy.

It’s a good start, but Google’s smart braided wires aren’t accurate enough for consumer tech. Another concern is sending accidental commands if the wire is touched or moved while listening to music.

Despite those concerns, the prototype seems promising. The I/O braid inputs seem faster than regular buttons since twisting for volume seems more natural. Google’s latest Pixel Buds finally dropped the wire, so don’t hold your breath on this tech any time soon.