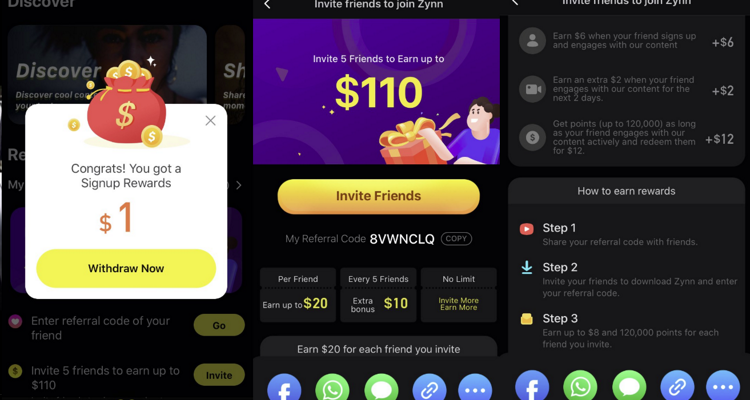 TikTok is facing stiff competition from another app — Zynn is a TikTok clone that pays users to watch videos.

Zynn is another Chinese-owned short-form video app that cribs a lot of its look from TikTok. The app is owned by Kuaishou — TikTok’s main competitor in China. (The Chinese version of TikTok is called Douyin.) Zynn released on iOS and Android earlier this month and has already topped the iOS App Store charts. It ranks first in the entertainment category and second among all apps.

That’s because this TikTok clone pays its users to refer friends and watch videos.

Zynn features user-generated short videos with endless vertical scrolling. The layout and comments section of Zynn looks ripped straight from TikTok’s interface. But the app’s surge in popularity is based on the rewards it pays to users (Zynn is currently only providing these rewards to users in the US and Canada).

Users can watch videos or invite at least five friends to download the TikTok clone to earn points. These points can then be converted into a cash balance or gift cards. Some users report being able to cash out their balance via PayPal before Zynn topped the iOS charts. But now Zynn only offers gift card withdrawals – likely to avoid Apple’s scrutiny.

The TikTok clone says it switched to offering gift cards because of “higher than expected traffic.”

The app is listed on both iOS and Android as being owned by a company called Owlii Inc. Owlii got its start in 2015 as a company working on 3D reconstruction technology for VR and AR applications. Kuaishou bought the company and now owns it.

Zynn is Kuaishou’s first serious attempt at a US video app. But how many of these people will stay with an app once the payments run out? TikTok’s growth hasn’t been entirely organic either – allegations of paid reviews have floated around since 2018. But beating TikTok with cash rewards sounds like a very expensive proposition.