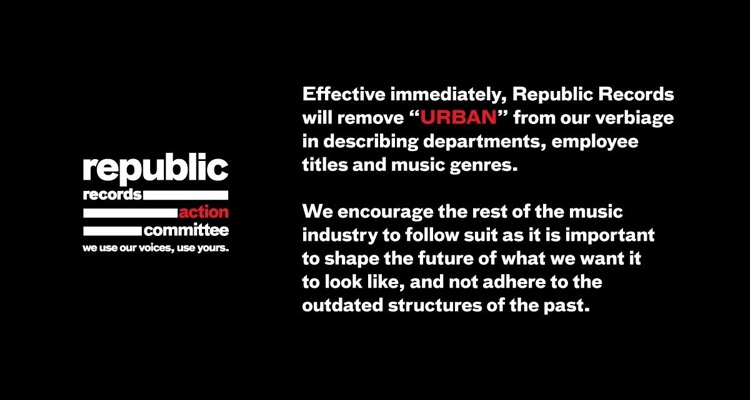 Republic Records, a division of Universal Music Group and one of the largest labels in the world, has decided to ban the use of ‘Urban’ to categorize or describe their music.

‘Urban’ has been a standard industry term for decades, though its use has recently been criticized as being unfair and discriminatory. Now, Republic Records has opted to completely ban the term, effective immediately.

“Effective immediately, Republic Records will remove the term ‘URBAN’ from our verbiage in describing departments, employee titles and music genres,” the label announced. “We encourage the rest of the music industry to follow suit as it is important to shape the future of what we want it to look like, and not adhere to the outdated structures of the past.”

The move will only erase the name, however, and will not result in any structural reassignments in departments, personnel, or releases themselves, according to preliminary details. Republic Records is home to mega-artists like Post Malone, Ariana Grande, The Weeknd, and Taylor Swift, among many others.

Accordingly, the shift is likely to have a fairly quick impact on other labels. Republic’s announcement has revealed a firm stance on a matter that had previously been discussed and debated, but not decided upon.  The term itself actually dates back to the 1970s, and has largely become synonymous with black artists and music.

So what will the new descriptor be? Presently, it’s unclear how titles, departments, and categorizations will be renamed at the label, or if a single, catch-all replacement phrase will even be employed.

Other changes are also afoot.

The decision closely follows the announcement of the Republic Records Action Committee (R2AC), which aims to address social and racial justice concerns both inside the label and broader industry. That complements an announcement this week from parent UMG, which is allocating $25 million for impactful change in racial inequality.