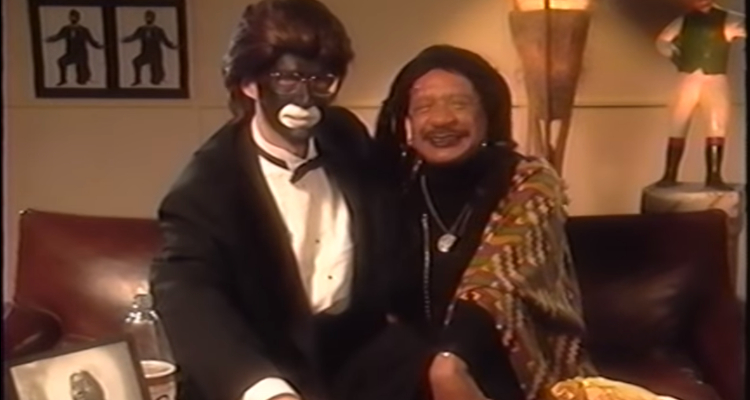 Still from a resurfaced video of Howard Stern wearing blackface in 1994.

Despite the resurfacing of multiple videos of Howard Stern appearing in blackface while using the n-word, Sirius XM’s CEO has expressed strong interest in renewing its contract with the radio veteran.

A video resurfacing this week showed Howard Stern appearing in blackface while repeatedly uttering the n-word, a development that predictably drew outrage. The video, which featured Stern donning blackface while imitating Ted Danson (who also previously wore blackface), was soon followed by other videos showing Stern in similarly offensive blackface skits. But despite the ugly clips, Sirius XM Radio has expressed interest in continuing its relationship with the radio jock.

On Wednesday, Sirius XM Radio CEO Jim Meyer underscored the company’s interest in renewing its contract with Stern.  “The relationship between Howard and myself has been great and is great right now,” Meyer stated at the CSFB media conference, according to comments captured by Deadline.  “I trust Howard and Howard trusts me.”

Sirius XM reportedly pays $80 million a year for Stern’s shows, though the draw for subscribers is enormous. The radio personality hosts the mainline Howard Stern Show and oversees a dedicated Sirius XM channel, Howard 100. Stern first switched from terrestrial radio into an exclusive agreement with Sirius in 2006, and is responsible for dramatically increasing the satellite radio platform’s subscriber base.

Stern’s contract is reportedly up for renewal at the end of this year.

At the conference, Meyer didn’t mention the blackface issue, instead focusing on accelerating the renegotiation discussions.  While noting that “I don’t see any reason why we won’t pick up the pace on those discussions,” Meyer continued: “I want Howard to work at Sirius XM for as long as Howard wants to work”.

Earlier, Howard Stern offered a lengthy explanation for the blackface videos, as well as his use of the n-word and heavy reliance on outdated African-American stereotypes.  “The sh—t I did was f—king crazy,” Stern stated on his Sirius XM show earlier this week. “I’ll be the first to admit. I won’t go back and watch those old shows. It’s like, who is that guy? But that was my shtick, that’s what I did and I own it.”

Separately, Digital Music News reached out to Sirius XM Radio for comment on the issue, but did not receive a response after multiple attempts.