Should ‘The Star-Spangled Banner’ Be Replaced With a New National Anthem? 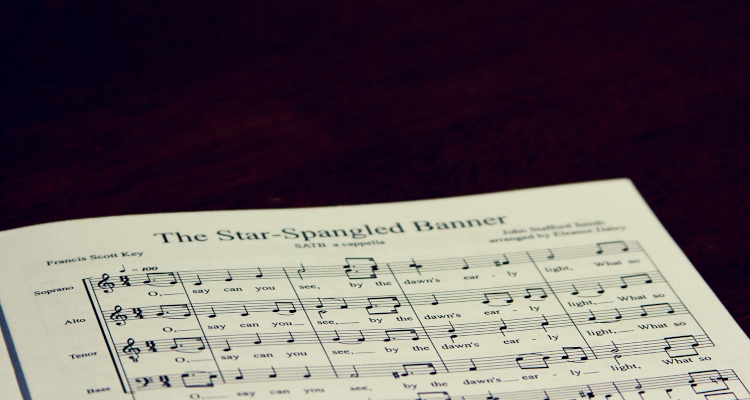 Amid ongoing protests and discussions pertaining to race relations and the contemporary prevalence of American historical figures, some are calling for the replacement of the United States’ national anthem, “The Star-Spangled Banner.”

The ongoing dialogue about race appeared to turn to “The Star-Spangled Banner” shortly after a crowd toppled a statue of Francis Scott Key in San Francisco, California.

For additional background, Key, a lawyer and distant cousin of The Great Gatsby author F. Scott Fitzgerald, wrote a poem entitled “Defence of Fort M’Henry” in 1814, shortly after witnessing the bombardment of Baltimore, Maryland’s Fort McHenry during the War of 1812. At the time, he was jailed aboard a British warship as part of hostage negotiations approved by President James Madison.

To be certain that Key wouldn’t relay information about their plans or positioning ahead of the battle for the strategically valuable fort, British generals insisted that he remain onboard the vessel until the conflict had concluded. The 35-year-old had a distant view of the fighting, but his vision was eventually obscured by rainfall and darkness.

The following morning, however, Francis Scott Key saw that the American flag was still flying high over Fort McHenry – meaning that American troops had repelled the British assault. He was inspired to write the aforementioned poem shortly after the fact, and the first stanza of the relatively lengthy work was ultimately set to composer John Stafford Smith’s popular “To Anacreon in Heaven.”

“The Star-Spangled Banner” formally became America’s national anthem in 1931, after President Herbert Hoover signed off on the corresponding congressional resolution.

During his lifetime, Key maintained a complex, seemingly contradictory stance on race, personally owning six slaves (who he eventually freed) and opposing the abolitionist movement as U.S. Attorney. But he also worked to transport free African Americans to African colonies and publicly declared slavery to be an “abomination.”

Social media users on both sides of the argument are voicing their opinions.

“The author of [the] American national anthem, Francis Scott Key, was a racist that hated black people. You should read the third stanza of what he wrote,” wrote one Twitter user.

(This individual was likely referring to the line “no refuge could save the hireling and slave” in the third stanza of “Defence of Fort M’Henry.” Key never elaborated on its meaning, and scholars have long debated the verse’s precise intent.)

“Since we’re speaking out against sh*t that feels racist. I’d be down for a new national anthem since Francis Scott Key was a racist. Also, into the idea of a new flag,” tweeted another individual.

A different person stated: “What’s wrong with the Star-Spangled Banner? Oh I know…we are tossing history and tradition out. Guess all that sacrifice by great-granddad will be forgotten too.”