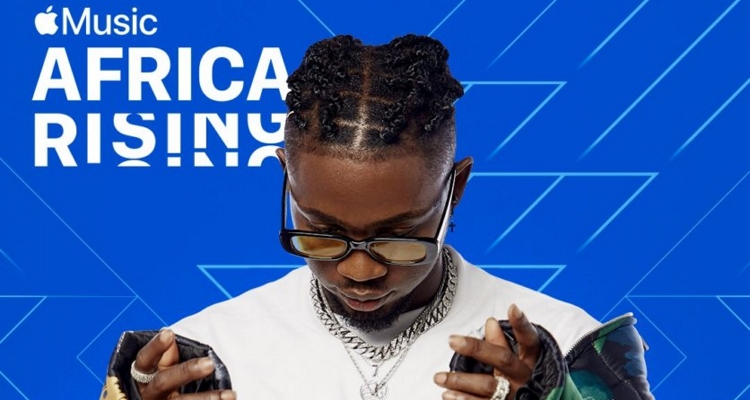 The initiative is ‘Africa Rising’ and it comes with a companion playlist featuring the same name. Apple Music says the new initiative will help “identify, showcase, and elevate rising African talent.” Nigerian-born singer and songwriter Omah Lay is the debut artist.

Africa Rising will feature a new artist selected by Apple Music’s editorial team every two months. That artist will be promoted globally in the ‘Africa Rising’ playlist – which will feature the cover star.

The new initiative is available in 33 countries in Sub-Saharan Africa. Omah Lay got his start in music during his teenage years as a member of the rap group, Lil King. A few years later, he switched to producing music. He dropped two singles in 2019, “Do Not Disturb” and “Hello Brother.”

Omah’s debut EP Get Layd became the #1 album on Apple Music in Nigeria after its release in May 2020. All five songs from the EP hit the Nigerian Top 10 singles chart.

Apple Music is working hard to showcase rising African talent in other initiatives, too.

“I’m so excited that my fellow Nigerian Omah Lay is Apple Music’s first Africa Rising artist,” Cuppy said in an interview. “This unique program and its playlist will elevate the next generation of African superstars and lift them up.”

Back in April, Apple Music expanded its service to 17 additional countries in Africa.

The global strategy is helping Apple edge out its rival, Spotify. For now, Spotify is only available in Algeria, Egypt, Morocco, South Africa, and Tunisia. The broader availability of Apple Music gives the Cupertino company a giant head start on gathering new African users.

Apple also faces stiff competition from a Chinese-owned streaming service called Boomplay. Boomplay is partly owned by Transsion Holdings and comes pre-installed on all Transsion phones by default. That strategy is something Spotify has experimented with by partnering with Samsung.

Boomplay raised $20 million in Series A funding last year and has licensing deals with Universal, Warner, and Sony Music. The continued expansion of easy access to streaming is helping curb rampant piracy on the African continent.