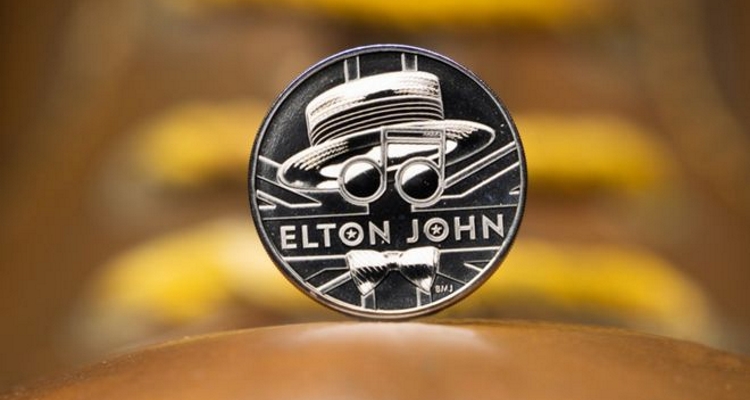 The Royal Mint is releasing a £1,000 gold coin to commemorate the legendary rock icon, Elton John.

“It really is a fabulous honor to be recognized this way,” said Sir Elton John of the mint’s coin.

“The last few years have contained some of the most memorable moments of my career, and this is another truly humbling milestone on my journey.” The cheapest Elton John coin featuring the iconic design has a face value of £5.

A one-kilo gold Elton John coin has a face value of £1,000, but it is priced at £68,865. The one-off coin will be auctioned off to raise cash for the Elton John Charitable Trust. Several other editions of the coin will be available in gold, silver, and non-precious metals for collectors who want the design.

“Elton John is without a doubt a British music legend and is recognized as one of the most successful singer-songwriters of his generation,” the Royal Mint’s Clare Maclennan says. “We are delighted to honor Elton’s significant contribution to British music on a UK coin.”

Elton John isn’t the first English rock star to be honored with a coin from the Royal Mint. That honor goes to Queen, who was issued a coin in January 2020.

Sir Elton John embarked on his final world tour, “Farewell Yellow Brick Road,” in 2018. Some of the final dates were disrupted by the COVID-19 pandemic, bringing the tour to a screeching halt. In March 2020, Sir Elton John hosted a stay-at-home concert to benefit health care workers.

The hour-long special featured performances from Billie Eilish, Dave Grohl, Camila Cabello, Mariah Carey, and others. During that event, John spoke about the AIDs crisis and drew parallels to COVID-19.

“Not long ago, there was another infectious disease that was ignored,” he begins. “It took musicians, actors, dancers, but it also took writers and bankers and lawyers and sons and daughters and best friends. Day in and day out, the disease got worse, because we did nothing.

“Too many forgot about compassion and decency, and so million and millions of people perished from AIDS. But this time, we aren’t going to let that happen. So stay home for the ones you love,” the singer implored those watching. His comments at the time attracted criticism from some on social media.