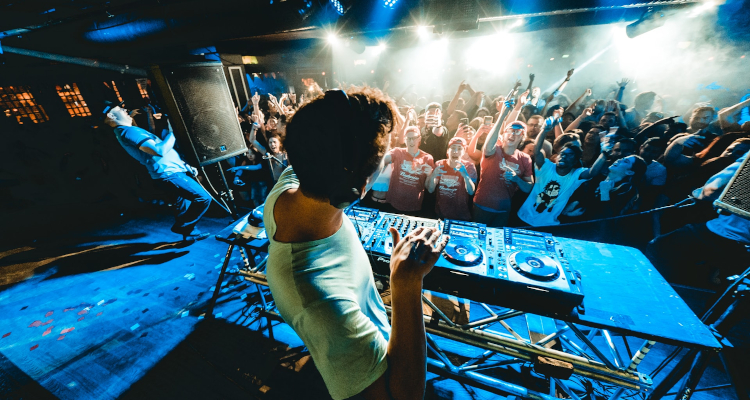 Though the British government has taken concrete steps to usher in the return of traditional concerts – including by approving outdoor gigs and giving socially distanced indoor shows the green light to resume in August – some eager fans have opted to immediately satisfy their live-entertainment needs by attending illegal raves.

The latest in this long-running series of illegal raves began on Saturday, July 18th, and continued well into Sunday. An estimated 3,000 individuals attended the free function – dubbed “Scumerset Free Party 2020” by some guests and/or organizers – which occurred at the former Royal Air Force station Charmy Down in Somerset County, roughly three miles from Bath, England.

A substantial number of “Scumerset” guests recorded portions of the lengthy happening, and predictably, footage reveals that the vast majority of attendees weren’t socially distancing or wearing masks. (Aerial video, captured by a drone, provides a detailed look at the precise scale of the rave, albeit before the entirety of the audience appeared.)

Beneath an overcast sky – and eventual rainfall – the crowd of young electronic music fans converged upon a makeshift dance floor, complete with flashing lights and loud music emanating from generator-powered equipment protected by tarps. To be sure, police quickly received calls relating to the illegal rave, with some residents complaining that they could hear the music from several miles away.

Despite appearing on the scene approximately 10 minutes after receiving the first such complaint, at about 11 o’clock Saturday evening, the Avon and Somerset Police Department was unable to disperse the crowd. Estimating that 1,000 or so persons were present when they arrived – a figure that would swell to 3,000, once again – officers determined that “the risks to public safety…were too great” to immediately confront the ravers.

The Avon and Somerset PD also cited an influx of other, possibly more urgent calls – over 1,000 during the same weekend –  in explaining the decision not to shut down the event. Moreover, law enforcement professionals pointed to other illegal raves, per an official statement, including a rave “in the Frome area” and an attempted continuation of the “Scumerset” rave on Sunday afternoon.

Police reportedly shut off the rave’s music by one o’clock PM on Sunday and cleared the field over the course of three or so hours after the fact. A handful of vehicles, a generator, and “other equipment” were seized, but just one arrest was made. It’s unclear whether this individual is cooperating with the ongoing investigation, though detectives have asked those with knowledge of the event (or other illegal raves) for assistance – and social-media responses to the request appear mostly critical.

“You write that like it was a success or you want a pat on the back or a thank you. The people of Bath and surrounding villages won’t give you either. Shabby job. 13 hours to shut down a rave. You should be ashamed,” stated one individual.

Illegal raves have become increasingly popular in England (and, in all likelihood, many additional nations) since the onset of the COVID-19 pandemic and the implementation of social distancing measures. And with the trend showing few signs of slowing down, it’ll be worth following in the broader context of legal concerts’ ultimate return.