Artist Hosts a Socially-Distanced Concert, Gets Attacked and Coughed on by a Crazy Fan 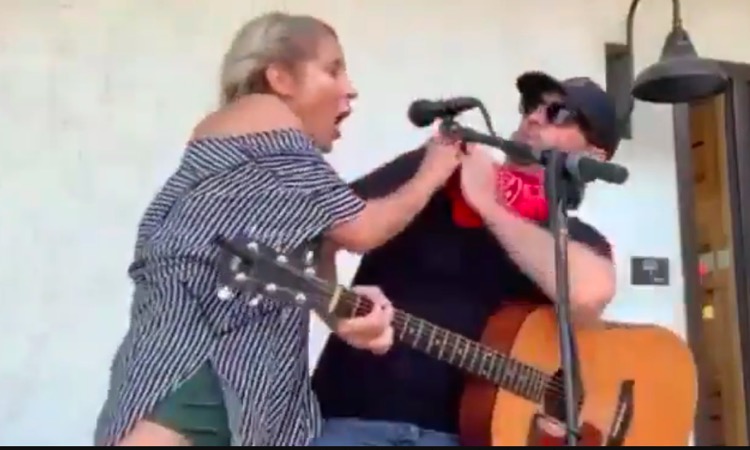 Clayton Gardner getting accosted by an unidentified coughing fan during a socially-distanced concert in Las Colinas, TX, on Friday.

Last Friday, country artist Clayton Gardner performed an acoustic set for a socially distanced audience in Las Colinas, a suburb of Irving, Texas. The intimate show became a little too intimate, however, when a crazed fan stormed the stage and appeared to cough directly on Gardner.

Clayton Gardner posted footage of the socially distanced concert — and the coughing sequence — on social media. 45 seconds in length, the clip opens with Gardner seated onstage, before his microphone and his audience. However, the “Buy You a Drink” singer’s attention is aimed not at the crowd of “about thirty people,” but at a blond woman standing roughly a foot to his side, hands on her hips, staring intently at Gardner.

The unwelcome fan assumed a position upon the stage at about the 15-minute mark of the hour-plus set, which was streamed to Facebook. “If you can do that [enjoy the show] from like seven feet away, that’d be cool,” says the artist, speaking into the mic and attempting to open his next track.

The woman’s response is muffled by Gardner’s guitar, but she seems to reply, “You suck,” to which Clayton states, “No, for real. Thank you.” However, the overexcited attendee doesn’t return to her seat, but instead circles behind Gardner and resurfaces on his other side, even closer than she initially was.

The woman then grabs Gardner’s kerchief (apparently being used as a mask before the gig, but draped over his chest during the performance), moves her face close to his, and appears to cough and mumble unintelligibly. As the shameless culprit stands tall and grins, a stunned Gardner asks (into the mic), “Can we get her out of here maybe? Please?”

“Are you for real?” the clueless super-spreader inquires. And predictably, Gardner responds with an unequivocal, “Yeah, dude! … You’re embarrassing yourself, not me,” and some clearly uncomfortable notes on his guitar. Finally, after the woman offers the crowd a thumbs down and Gardner starts tuning his guitar, the shocking episode draws to a close. The blond cougher says, “Okay,” as if the whole incident was a simple misunderstanding, and exits the stage.

Clayton Gardner has since taken to social media to comment on the matter. In a lengthy statement, the musician indicated: “There is a lot of hate and blame going around and I don’t feel like that is necessary or productive. … She reached out to me and apologized and I have accepted her apology and forgiven her.”

Gardner expressed his distaste for media scrutiny and his wish to keep himself and his daughter safe amid the COVID-19 pandemic. “It was the first time in 10 years I had someone come behind me and do that. … There is to be no more blame or hate on my page. We can all learn something from this and be kind to one another.”

Social media users on all sides of the issue are voicing their opinions presently. It’s unclear whether the stage-storming individual is infected with the novel coronavirus, but Gardner didn’t mention as much (or state that he’s come down with the disease) in any of his videos or posts.