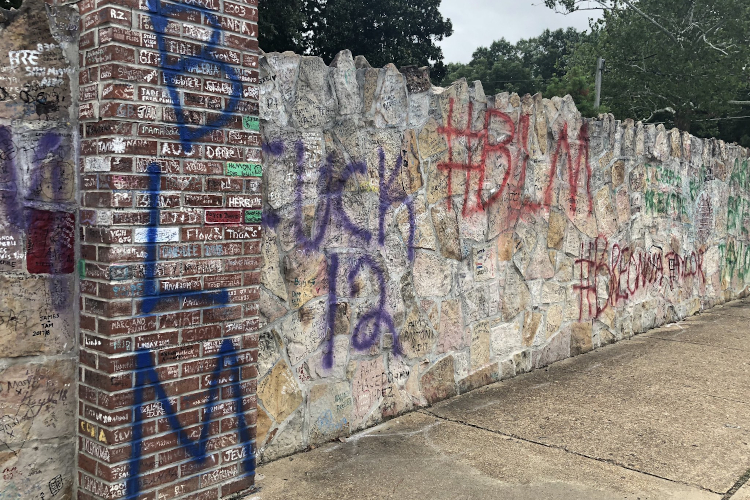 Graffiti on the outer wall of the Graceland property in Memphis, Tennessee.

Elvis Presley’s Graceland was recently vandalized with “BLM” and “Defund the Police” graffiti.

It appears that the responsible parties left their mark solely on the famed Graceland wall – not the mansion itself, which sits on a nearly 14-acre patch of land. At the time of this writing, however, neither Elvis’s estate nor Graceland officials had commented publicly on the extent of the destruction, which occurred overnight. Similarly, it’s unclear presently whether protesters specifically targeted the popular Memphis, Tennessee, tourist destination, or arrived on the scene incidentally.

However, several pieces of evidence suggest that the graffiti resulted from a carefully coordinated effort. Memphis’ Levitt Shell amphitheater, where Elvis Presley delivered his first paid concert, was also spray painted, with phrases such as “Eat the Rich” and “F—k Trump.” Similarly, the extensive volume of text on the Graceland wall – other spray-painted phrases include “Abolish ICE,” “Breonna Taylor,” “Living Wages,” “#StayTuned,” and “Fuck 12,” an anti-police slogan – indicates that many individuals likely participated in the late-night event.

Additionally, Black Lives Matter Mississippi (Graceland is about four miles from the Mississippi border) addressed the vandalism on social media. “Now that we have your attention, COVID & Racism is killing us. Stop placing value of white icons and property over Black lives,” the entity wrote, with the message preceded by a quote about the Graceland graffiti.

City employees (a portion of the graffiti was left on the sidewalk) and volunteers are currently removing the graffiti, and newly released images show that they’ve made substantial headway. Moreover, fans of “The King of Rock ‘n Roll” are taking to social media to voice their disapproval of the vandalism; others are arguing that because Graceland visitors typically write their names and short messages on the outer wall, the graffiti didn’t actually deface the structure.

“They’ve done it now! These anarchist goons have defaced Graceland! Please @realDonaldTrump — federalize the Natl Guard and round up these criminals! Where I come from, you don’t mess with Elvis!” former Arkansas Governor Mike Huckabee tweeted this morning.

“Every time I’ve been to Graceland in the past 40 years, that wall has been covered in graffiti, mostly from Elvis fans. Graceland means a lot of things to a lot of people,” wrote an individual on the other side of the issue.

The Memphis Police Department hasn’t yet provided an update on its ongoing investigation into the Graceland vandalism.