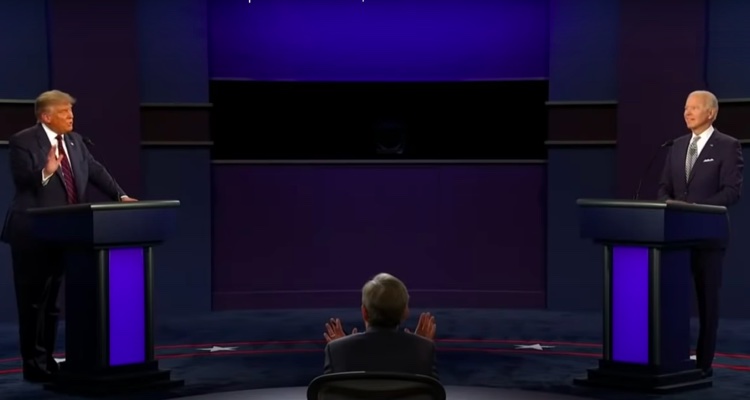 Donald Trump accepted his invitation. But after Tuesday night’s messy presidential debate, Joe Rogan is now having second thoughts about moderating another battle between Trump and Biden.

Previously, Joe Rogan sounded enthusiastic about hosting a debate between Trump and Biden.  And President Trump quickly accepted the invitation on Twitter.

“I would want that,” Rogan said after guest Tim Kennedy suggested the possibility. Rogan even started detailing the interview environment: “First of all, I’d want no one else in the room. … Just the three of us. And you would have to stream it live so no one could edit it. And I would want them in there for hours.”

“If they wanted to do that — they both wanted to come here in Austin, sit down and have a debate — I would 100% do it,” Rogan continued.

But after Tuesday night’s raucous brawl, it looks like Joe Rogan has had a slight change of heart.

Interestingly, Donald Trump himself pushed for Rogan to moderate the next debate. After his brawl with Biden, Trump retweeted this from Tyler Cardon, CEO of Blaze Media.  “Regardless who you’re pulling for, I think we can all agree that Joe Rogan would do a much better job moderating this thing than Chris Wallace,” Cardon wrote.

That wasn’t the only request, and Rogan was quick to respond.  “You don’t need me to handle this ‘debate,’ you need @johnmccarthymma,” Rogan posted on Instagram, referring to beast-like MMA fighter, referee and broadcaster Big John McCarthy.

During the two-hour presidential debate smackdown, host Chris Wallace barely kept control over the warring candidates. Trump oftentimes flattened both Wallace and Biden, with Wallace routinely putting his hands in the air to control the chaos.  This the opposite of civil discourse, with both Trump and Biden routinely interrupting, talking over, or simply insulting the other for most of the two hours.

Accordingly, even Big John McCarthy was quick to turn down the offer. “Watching old men who really can’t fight… Fight??? Oh that would be ugly,” Big John posted on Twitter.

Part of the problem is that Joe Biden didn’t respond — and it’s unclear if Biden even knows who Rogan is.  But even if he does, Biden may not be interested wrestling with both Rogan and Trump in a locked podcast studio somewhere in Texas.

Incidentally, it was Tim Kennedy who floated the invitation on Twitter after his Rogan interview. “It would be four hours with no live audience,” Kennedy wrote. “Just the two candidates, cameras, and their vision of how to move this country forward. Who wants this?”

“I do!” Trump quickly declared, while Biden remained quiet.

A tap-out by Rogan is bad news for Spotify, whose subscriber numbers and broader engagement would have skyrocketed.

Spotify recently roped Rogan into an exclusive podcasting deal for a reported $100 million, a move that Wall Street warmly embraced.  A high-profile debate attracting tens of millions — if not more than one hundred million listeners — would easily justify the expense for the streaming music platform.

And realistically, Rogan’s moderation would likely be tough but fair.  Rogan has routinely assailed both Trump and Biden, while questioning Biden’s mental capacities.