After a Judge Blocks Trump’s Ban, TikTok Launches a U.S. Elections Guide for Its 100 Million Users 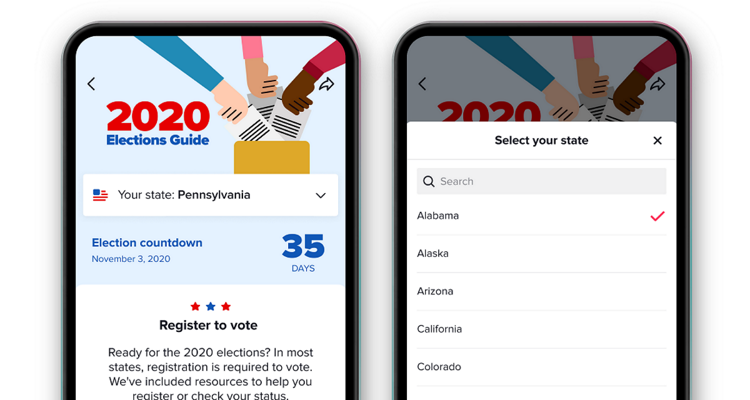 After a federal judge blocked the Trump TikTok ban, the app has conveniently launched a U.S. Elections Guide.

The Elections guide is accessible on TikTok’s Discover page, making it a prominent feature. It’s available in English, Spanish, and several other languages. TikTok also offers federal and state election information by state. The app draws its information from BallotReady, a voting information site.

TikTok says its U.S. Elections guide will be linked at the bottom of all election-related videos.

“On TikTok, we’re seeing how people, especially younger voters, are passionate about important issues and are ready to make their voices heard,” Alex Niemczewski, CEO of BallotReady says. “We’re partnering with TikTok for their elections guide because younger voters often do not realize everything that will appear on their ballot. We believe that TikTok can help them vote their entire ballot.”

TikTok’s Election guide includes instructions for how to vote in all 50 states. It also provides information about media literacy and how to spot misinformation. TikTok says it will use the guide to provide voting resources to those with disabilities, those overseas, students, and those with past convictions. TikTok says the guide is built with privacy as a focus.

“Our elections guide is built with user privacy in mind, so a user must visit the website for a state or non-profit for anything that involves sharing their information, including registering to vote,” TikTok Vice President of U.S. Public Policy, Michael Beckerman, confirms. “Interactions with this guide in our app have no bearing on future TikTok experiences, such as recommendations or ads.”

TikTok’s meteoric growth since 2018 has caused it to become a social media powerhouse. Back in August, TikTok revealed it had over 100 million monthly active users in the US alone. It has 50 million daily active users. In just two years, TikTok’s growth has skyrocketed by over 800%.

TikTok User Growth in the U.S.

That huge jump between October 2019 and June 2020 shows just how much the pandemic helped TikTok grow. The app’s monthly active user base tripled in that space alone. TikTok’s global growth has seen similar successes.