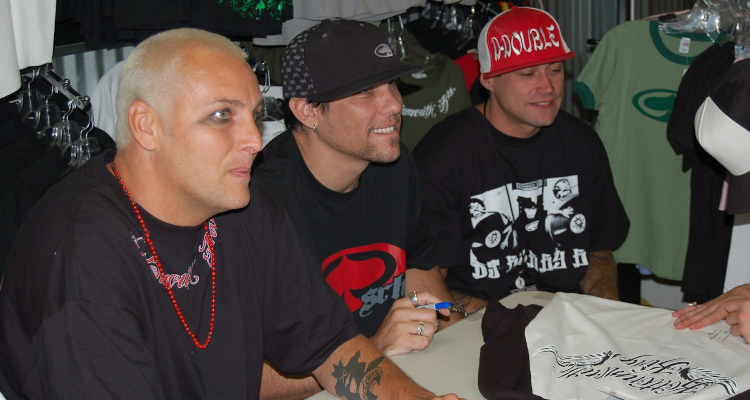 Kottonmouth Kings acknowledged the unfortunate news on social media, writing of Saint Dog: “We will miss you and your big heart. You were one of a kind and our hearts our broken. But we promise to keep your legacy alive through your music. Everyone please take some time and say a few words or tell a story about our fallen brother below. He touched so many and we will keep his legacy thriving.”

The message didn’t mention the Minnesota-born rapper’s cause of death, and at the time of this writing, Saint Dog’s family and representatives hadn’t publicly addressed the matter. Aside from cofounding Kottonmouth Kings and helping craft the California group’s 1998 debut album, Royal Highness, Saint Dog appeared in 2012’s Mile High and 2015’s 18-track Krown Power (which has a 37-track deluxe edition). Additionally, Thronson released three solo albums across his more than quarter-century career and reunited with Kottonmouth Kings for 2018’s Kingdom Come.

Many fans are celebrating Saint Dog’s life on social media, and after penning an Instagram post about his friend and fellow Kottonmouth Kings cofounder, D-Loc (whose full name is Dustin Miller) posted a heartfelt tribute video.

“Just wanted to leave a message for everybody. This is a sad say in the camp. It’s still hitting me pretty hard,” a tearful D-Loc said in the short clip. “When I think about all the stuff that we did as kids. It’s tough, when your close ones are no longer with you. … Thank you guys for all the complements and condolences that you gave Saint, and all the comments and everything. That was really cool.”

Johnny Richter, whose full name is Timothy McNutt, also wrote a message about Saint Dog. “On this day I’m digging back in my memory bank and thinking about all the good times I had with Steven Thronson,” the 43-year-old stated in part. “It’s that ride or die mentality I’ll remember most about him. I just can’t believe he won’t be ridin with us no more.”

Mikey Bonez, who played guitar for the Kings between 2015 and 2016, on Kingdom Come, expressed his condolences in an Instagram post. And The Dirtball (real name David Alexander), who was part of the group between 2009 and 2016, offered a message of his own: “Rest In Peace to one of the realest! #saintdog #kmk #foreverdope.”