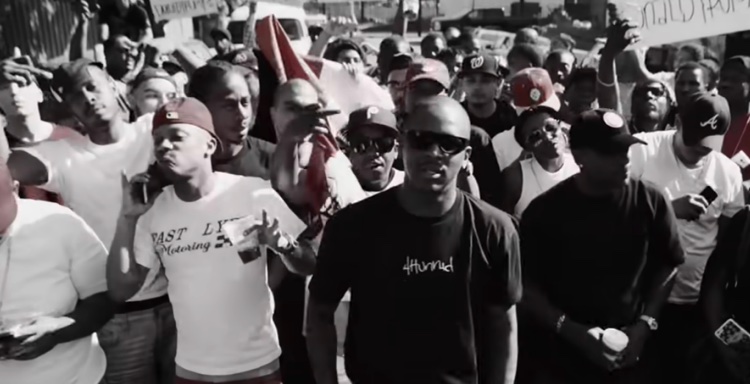 A virulently anti-Donald Trump track from rappers YG and the late Nipsey Hussle is now enjoying a serious surge — four years after it was released.

We’ve seen a number of top rappers throw their support behind Donald Trump ahead of the November 3rd election. It’s safe to say, however, that YG wasn’t one of them.  The LA-based rapper has been virulently anti-Trump since the last Presidential election in 2016 — when the Donald was considered an extreme long-shot for the presidency.

Since that point, YG’s collaborator on the not-so-subtle ‘F—k Donald Trump,’ Nipsey Hussle, has passed away. But the track itself is enjoying a monstrous surge following the election being declared for Joe Biden.  According to Nielsen/MLC data, ‘F—k Donald Trump’ received north of 2.5 million streams on November 7th, when Joe Biden was named the victor of the 2020 Presidential race.

Meanwhile, the Trump camp is aggressively litigating to contest election results in states like Pennsylvania. And Trump himself has refused to concede while alleging voter fraud, insufficient ID verifications, and unfair deadline extensions for mail-in ballots.  So far, state AGs and judges are aggressively pushing back on those challenges.

For those unfamiliar with ‘FDT,’ the overall message isn’t hard to figure out.

And YG is hardly the only rapper or musician to publicly blast Trump in public. But while many artists have publicly complained about Trump, few have released songs as a blunt as ‘F—k Donald Trump.’ That may explain the track’s resurgence, even though it was actually written prior to the last election.

Incidentally, a long list of other musicians have publicly spoken against Trump. That’s obviously benefited rappers like YG, though it’s unclear if picking a political horse makes sense for many artists — at least from a business standpoint.

Part of the problem is that America was almost evenly split between Biden and Trump, with Trump garnering nearly 72 million votes while Biden racked up nearly 77 million in the popular vote. And passions ran hot on both sides.  That can make bold political statements problematic for mega-bands like the Rolling Stones that appeal to a massive and diverse demographic.

Still, the Stones were among those criticizing Trump, along with a slew of other artists spanning Neil Young, Ariana Grande, Bruce Springsteen, Justin Timberlake, and Taylor Swift (just to name a few). The same may apply to those supporting Trump, a list that recently counted Lil Wayne, Lil Pump, and even 50 Cent (at least for a brief moment).

Here’s a rundown of where artists stood heading into the November 3rd election.