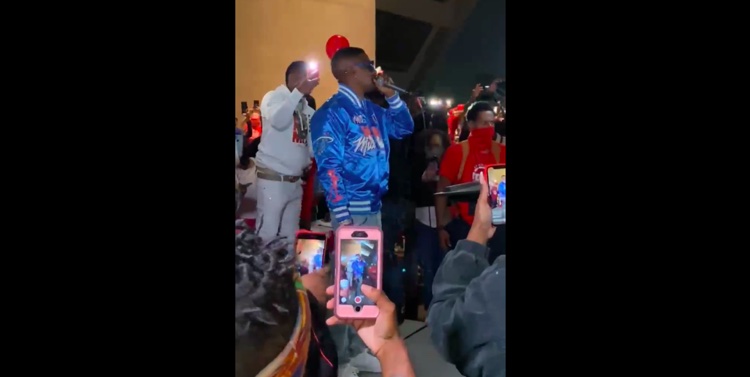 Boosie Badazz paying tribute to Mo3 in Dallas, shortly before the murder attempt.

Rapper Boosie Badazz has survived an attempt on his life this weekend in Dallas — but not before reportedly getting shot in the leg.

It’s unclear why Boosie Badazz (real name: Torrence Ivy Hatch Jr.) was being targeted during his brief visit to Dallas this weekend. But multiple reports point to an attempted murder by unknown drive-by assailants on Saturday evening. The attackers unleashed a flurry of bullets in a strip mall parking lot on Boosie’s sprinter touring van.

Immediately after gunshots were sprayed, Badazz’s van quickly veered to exit the parking lot and vacate the area. At this stage, it’s unclear if the assailants gave chase, though it appears they also immediately left the scene.

Boosie Badazz was in town to honor the late rapper Mo3, a Dallas native who himself was recently gunned down. Mo3 and Boosie Badazz were friends and collaborators, an affiliation that may have drawn the assassination attempt.

So far, there isn’t any known connection between the Mo3 death and the Boosie drive-by, though the timing is certainly suspect. The attempt on Boosie’s life happened shortly after the rapper paid a public tribute to his slain friend, drawing a crowd of followers.

Mo3 was gunned down while driving on a Dallas freeway I-35 after a dispute with another rapper.

Days later, the attempt against Badazz was almost successful: according to details emerging from local law enforcement, Badazz suffered a gunshot to a lower leg, and was briefly treated at a nearby Dallas hospital for injuries.

While at the hospital, reports further note that the rapper was heavily protected by members of his entourage to protect against another attack.

The Badazz assailants didn’t reappear, however — or at least they didn’t attempt another assassination while Boosie was being treated. As noted, after the quick drive-by, the assailants quickly fled the scene. By the time Dallas PD arrived, nobody was around — and no charges have been made.

It’s also believed that Boosie Badazz himself has refused to cooperate with authorities, making it difficult to pin the assault on any suspects.