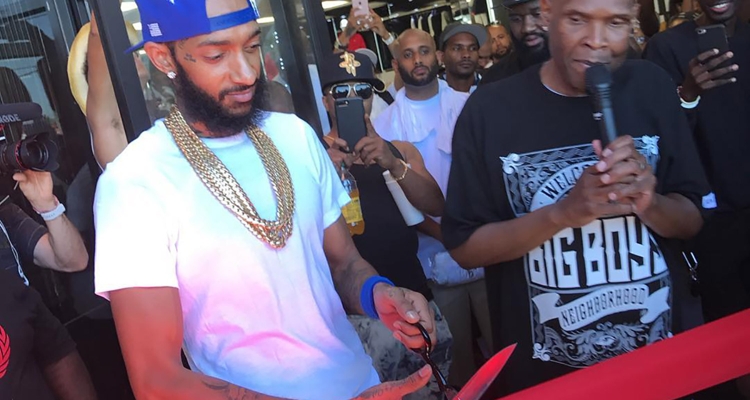 Nipsey Hussle’s Marathon Clothing Store in south LA was looted and vandalized by an unknown group of people.

A video of the vandalized store Nipsey Hussle founded is making rounds on social media, showcasing the aftermath. Witnesses say a group of people smashed all the windows and looted the store. They tagged graffiti all over the walls and parking lot before leaving.

The incident has left the community shocked and outraged as they come to terms with the violence. “If I ever find out who did this, it’s ugly for them,” one poster says. “I swear to God; you can hurt somebody for this.” The Marathon Store isn’t the only establishment in the small strip mall. Other stores adjacent to Marathon in the plaza were also damaged, and people are coming together to clean up. The store sells clothing items like hats, hoodies, and music.

The Nipsey Hussle store is also a memorial for the late rapper.

The beloved rapper was shot and killed at the store in 2019, just two years after he founded the retailer. The area at the Slauson Avenue strip mall has since become a makeshift memorial for him. The man suspected of killing Nipsey in the shooting, Eric Holder, is still awaiting his trial.

Profits from those early purchases went to the investment fund called ‘Our Opportunity.’ The fund is the program and brainchild of Nipsey Hussle and his business partner, David Gross. The idea behind the fund is to help community leaders “of every large, majority-black city to, in a systematic way, acquire and develop transformative projects.”

Fans who want to do their part to help rebuild may consider supporting Nipsey’s foundation. The reaction to the news that the Nipsey Hussle store was vandalized has been more outrage. “Bro, the whole area should be protecting that store, smh—weak ass dudes. Funny though, this happens after they release FDT tees just a week or so ago. Can this year be over already?” one fan asked on Twitter.

He’s referencing the Nipsey Hussle song, “FDT” about the current President Donald Trump. Nipsey had a less than favorable opinion of Trump’s administration.