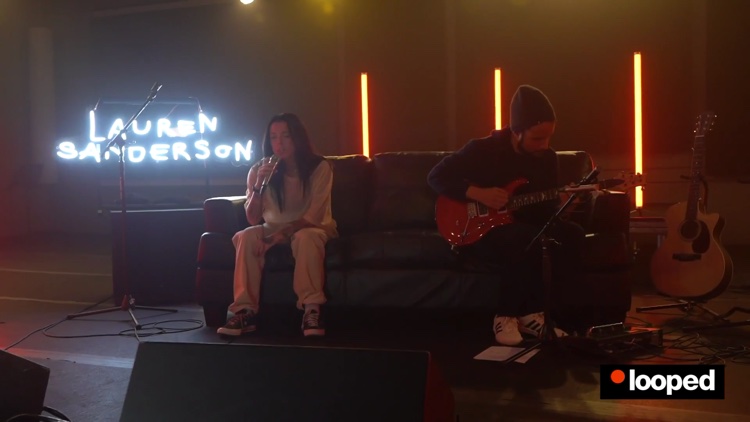 As the months continue to go by, fans are craving shows from their favorite artists. In turn, artists like Lauren Sanderson are getting hungry to perform.

On Friday night (November 20th), Lauren Sanderson performed her first virtual concert, accompanied by her guitarist, Giancarlo Castillo, in a studio in Los Angeles, CA. Sanderson opened for FINNEAS last fall and is set to tour for her debut album in April 2021.

For exclusive access to this livestream, the ticket was priced at $15. Additionally, fans were able to attend a 1-on-1, live video chat meet & greet with the artist for $35.

As the livestream began, fans funneled into the chat log, engaging with each other and expressing their excitement for the show to start. My first question going into any artist’s virtual show is: “will the artist be able to provide an energy just as lively and captivating as they might in-person?”

Her stage setup was just herself, her guitarist, a comfy couch, and some neon lights. She kicked off the show with one of her latest tracks, “Frustrated,” from her debut album, Midwest Kids Can Make It Big (Deluxe). You could clearly see how happy she was to be performing again, knowing her fans were tuning in to support her first livestream. She even went on to say, “I hope you guys feel good. I feel so happy knowing we could share this moment right now.”

Sanderson explained the meaning of some of her songs or what she was going through when she wrote them. She gave her supporters the opportunity to relate to her and her music in this intimate setting. Before performing, “Written In The Stars,” she explained that her music is for anyone with a dream. The song was about trusting the process and believing in yourself.

Along with that, she touched on how these months in quarantine might have been hard and even lonely at times, but she wanted to emphasize that it shouldn’t be a time of discouragement.

Her entire performance made it feel as though I was in her presence, receiving my own personal show.

The picture and sound quality of the livestream was clear, with no lag. It made it feel even less like I was just watching through a computer screen. She assured her fans that this acoustic performance was only the first of many virtual shows she will do.

After performing her last song, “Better Anyway,” she took the opportunity again to encourage her viewers to follow their dreams in a positive light. She said, “I have a master plan of spreading this message of living your dreams. Whatever your dream is that your parents aren’t going to like, or your teachers don’t think you can do it, I’m telling you right now, you can do it. I’ll see you soon.”

Overall, I look forward to catching another virtual show and even an in-person live event someday.

Written In The Stars