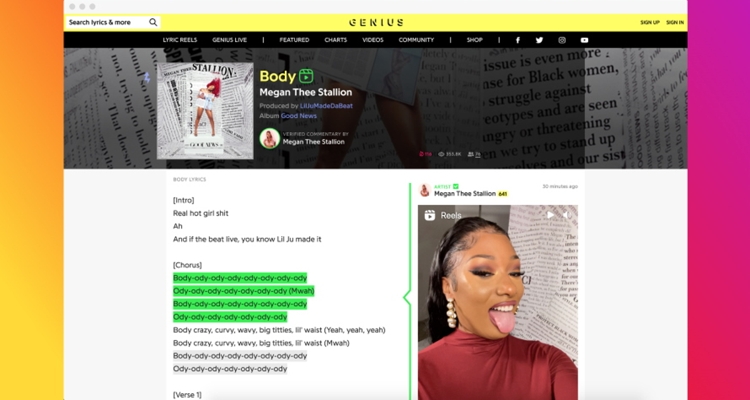 Genius and Instagram have teamed up for ‘Lyric Reels,’ a new behind-the-lyrics feature.

The new feature kicks off with Megan Thee Stallion discussing the lyrics for “Body.” Other artists set to appear in these Lyric Reels videos include 24kGolden and Tate McRae. The new Lyric Reels can be viewed on select song pages on the Genius website or the iOS app. The @genius Instagram account is also sharing the Lyric Reels.

The feature gives Instagram’s newly created Reels short-form video feature more weight. It’s a shameless copy of TikTok — which finds itself in a precarious legal position in the United States. Reels has since taken a front-and-center position inside the Instagram app — causing some online backlash from users. Despite that, the Reels feature appears to be poised for success with partnerships like this one.

“When new music drops, fans flock to Genius.com to annotate and discuss the lyrics to the latest songs within minutes of their release,” the companies emailed Digital Music News. “Starting today, select new song pages on Genius will include a Lyric Reels icon, indicating that you can watch a series of 30-second Lyric Reels featuring the artist providing exclusive new commentary on the lyrics and other behind-the song details directly on the song page itself.”

Lyric Reels are poised to help Instagram become the go-to destination for artist interaction. TikTok’s massive growth was fueled by its purchase and integration of Musical.ly, which has its roots in users lip-syncing and sharing their favorite music content. But Instagram is taking that one step further by becoming the go-to destination for broader artist interaction.

Lyric-heads love to discuss the double and triple entendres often found in hip-hop and rap lyrics. Now, they have the chance to go straight to the artist for clarification in a way that has never been done before.

The partnership could change how lyrics are consumed, too. Getting artists on board with discussing the behind-the-lyrics commentary turns Reels into a VH1 pop-up video. It puts more emphasis on the lyrics by putting the artist front and center in the discussion. It’s a novel way to turn short-form video formats into something useful beyond 15-second twerking videos to “WAP.”

TikTok may find itself in trouble if it can’t innovate the short-form video format. Sure, teens love it, and advertisers are flocking there – but how much relevance will it have five years from now after Facebook dominates? Remember how popular MySpace was just 15 years ago? Now it’s a footnote in online history – like TikTok could be.