Why Liam Gallagher Played a Crowdless Show on a River Barge 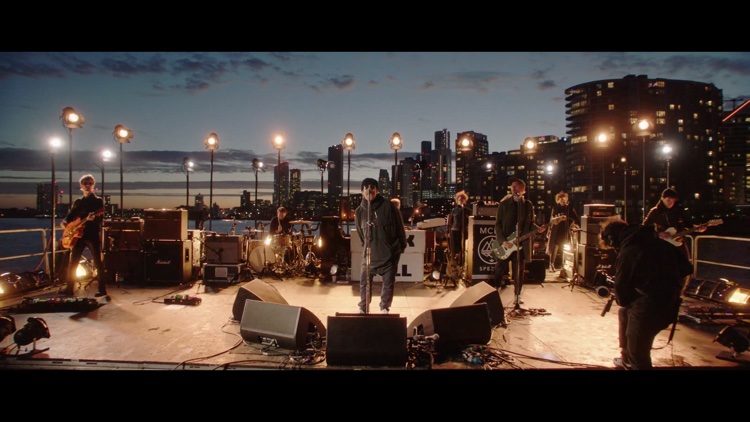 Imagine walking along a bridge and seeing a full band perform on a boat in open waters — only to find out a month later it was Liam Gallagher.

On December 5th, Liam Gallagher performed live for an exclusive virtual show, Down by the River Thames. Performing with Gallagher was his full band and backup vocalists. This pay-per-view global livestream was priced at $22.50, presented by MelodyVR, and it was held on a barge in England on the River Thames.

A few days before the show, Gallagher had posted his setlist on Instagram exciting his fans from his solo career and his days as lead singer for Oasis.

Right off the bat, it was clear that the production quality of this show was far beyond my expectations. The show opened up with beautiful drone shots of the River Thames and the sound of a helicopter passing by. The drone view spotlighted on the barge, and cut to Gallagher and his band kicking off the show with “Hello” from his days as lead singer for Oasis.

As I’ve mentioned in other reviews, my question about virtual shows is whether artists can translate their energy through the livestream. Gallagher delivered that, and more. During “Columbia,” I felt an overwhelming sense of FOMO not being able to attend the performance.

Gallagher and his band were full of power for every song, consistently throughout the show.

The drone shots were an awesome reminder that they weren’t on a stage with a backdrop. The barge moving along the river during sunset will make you miss outdoor events. Perhaps that longing will only make it more exciting when outdoor gigs begin again.

After the sun had set and the barge approached the bridge, Gallagher began a slower song, “Once.” You could see people walking along on the bridge after noticing the show on the barge, catching this free performance live and in-person. The slower tempo made the song feel a lot more intimate; some fans were waving from the bridge hoping for a wave back.

The stage setup on the barge was simple. It featured the band, backup vocalists, and Gallagher front-and-center with some lighting poles in the back. Anything more was unnecessary because of how great the performance was as a whole.

Gallagher ended the show with “Champagne Supernova” and gave a short, sweet goodbye of “Thank you, goodnight, happy Christmas!” By the time the last song arrived, I couldn’t believe a full hour had gone by. Consistently throughout the show, there was never a dull moment.

After the credits, there was a pre-recorded performance of his new song, “All You’re Dreaming Of.” Liam Gallagher is booked to headline Reading & Leeds in 2021.  Given how great this virtual show came out, I’d look forward to catching this live at a festival.

Down by the River Thames setlist:

Why Me Why Not

All You’re Dreaming Of