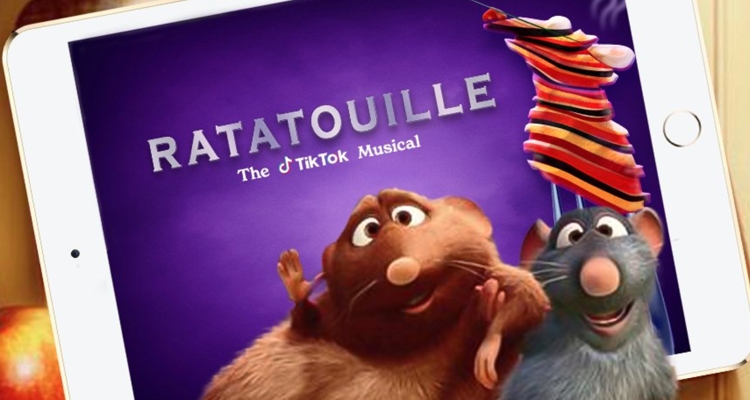 The TikTok musical premiered on Friday on the TodayTix platform, with over 200,000 tickets sold. Another encore performance happened on Sunday night, with more than 150,000 viewers watching that time. Between the two platforms, around 350,000 people tuned in for Ratatouille: The TikTok Musical.

“When Greg Nobile first approached us with the idea to produce a benefit event surrounding Ratatouille, never did we imagine that it would blossom into such an amazing outpouring of love and support for The Actors Fund,” says Thomas Schumacher, President & Producer of Disney Theatrical Productions. Disney gave the producers of the Ratatouille TikTok musical their blessing.

“What we all saw New Year’s day was a celebration of art and craft that was as charming as it was moving. It’s thrilling to see how the theatre-makers on TikTok and the Broadway community came together to provide aid to so many in need during this unprecedented time. Congratulations to our friends at Seaview, all of the artists involved, and our tireless colleagues at The Actors Fund.”

The Ratatouille: TikTok musical was created in less than a month. The $2 million donation benefits struggling performers impacted by the pandemic.

The full cast of the Ratatouille TikTok musical included:

The musical is a one-time performance that featured content created by the TikTok community. The collective work has earned the engagement of more than 200 million fans around the globe. The Broadway Sinfonietta orchestra performed each piece. The musical was adapted for the virtual benefit by Michael Breslin and Patrick Foley. It was choreographed by Ellenore Scott and directed by Lucy Moss.

While the Ratatouille musical was a one-off event, it may be the beginning of a trend. With over 350,000 people tuning in to benefit struggling actors, online musicals may become more prominent.

That’s especially true if live events and concerts can’t get back to normal until the fall. Dr. Fauci says 70% of the population needs to be vaccinated before live events return to normal. Audience members may be required to wear masks for the foreseeable future to help stop the spread, too.