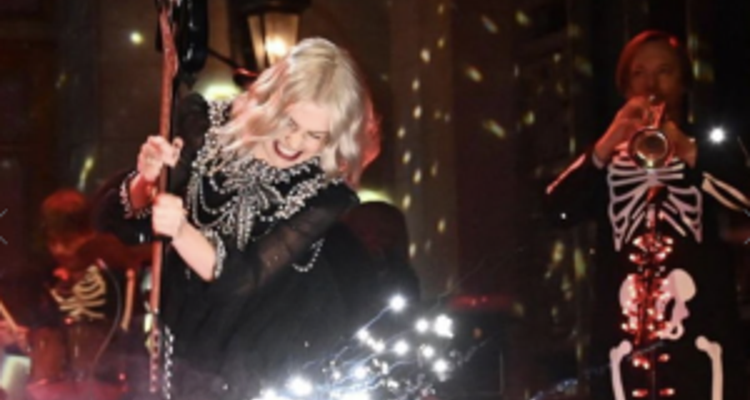 Bridgers caused a stink online after some musicians commented on the smashed instrument in February. The smashed guitar was recently put up for auction by GLAAD and sold for over $100k at the auction’s close.

The supervising producer of the GLAAD Media Awards says the auction took off. “I know she has a loyal fan base,” Anthony Ramos says. “Saturday night when I went to bed, it was around $18,000, and I was like, ‘that’s a great number!’ I was kind of hoping we would get to 25. Then I woke up and it was 40, then 50, then 80, and finally over 100. Obviously, we were very pleasantly surprised. I’m so thankful someone wanted to support our work and wanted that guitar so badly,” Ramos told Variety.

The winning bidder’s name is a secret to protect his/her privacy. Phoebe donated the guitar to GLAAD to help raise money for the LGBTQ community. “She made a great album, and we love all the work she’s doing and love working with her,” Ramos continued. Bridgers was nominated for outstanding breakthrough music artist at the GLAAD Music Awards, though she lost to upstart rapper Chika.

So who’s idea was it to auction the guitar in the first place? Ramos says he reached out to Phoebe Bridgers to inquire what happened to the smashed relic after the SNL episode aired in February. Bridgers was happy someone was interested in the relic, which she kept.

“Fortunately, no one got rid of it,” Ramos says. “It’s in really good condition, given that it’s obviously distressed and broken. I can see it being put on a wall as a great art piece.” Bridgers’ smashed the guitar during the climax of “I Know the End.” The event sparked some backlash online from other musicians like David Crosby, who chimed in.

“Pathetic, guitars are for playing, making music, not stupidly bashing them on a fake monitor for childish stage drama,” Crosby tweeted after watching the episode. Many online soon pointed out the hypocrisy on display, as Pete Townshend and Jimi Hendrix made shows out of destroying their instruments. Crosby’s response? “I really do not give a flying F if others have done it before. It’s still stupid.”

Others pointed out that the guitar the singer smashed on stage was relatively cheap. “I told Danelectro I was going to do it, and they wished me luck and told me they’re hard to break,” she tweeted about the incident.