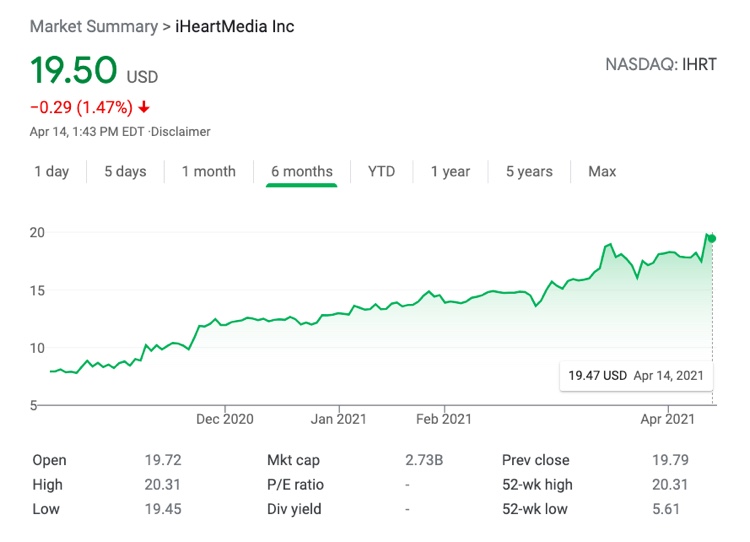 iHeartMedia stock (IHRT) has quietly climbed by approximately 55 percent since 2021’s start – and nearly tripled in value since April of 2020, touching an all-time-high of over $20 per share in the process.

At the time of this piece’s writing, the San Antonio-headquartered radio company’s shares were worth $19.70 apiece – an almost $3 increase from the per-share price in mid-March of 2021. Additionally, iHeartMedia stock briefly cracked a record high of $20.31 per share shortly after the market opened this morning. As is the case with most every stock-price fluctuation, it’s difficult to pinpoint the precise factors that resulted in the movement.

However, it bears mentioning at the outset that iHeartMedia purchased digital-audio and podcasting technology platform Triton from The E. W. Scripps Company in a $230 million deal in February. About one month thereafter, Global Media & Entertainment Investments (GMEI) publicly detailed its intention to increase its iHeartMedia stake to as much as 49.99 percent, and the move may well have inspired confidence in other investors.

That said, Global’s counsel in a letter to Albert Shuldiner, chief of the FCC’s audio division, specified that company higher-ups were “frustrated” to learn of iHeartMedia’s “unilateral” decision to cap their ownership at 9.99 percent, in a petition for declaratory relief with the FCC.

iHeartMedia then responded to the letter and the criticism in a formal release, indicating that “because GMEI is a foreign shareholder, its recent investment was inconsistent with the FCC’s foreign ownership rules and created an operating issue for us under the FCC’s regulatory framework.”

The FCC petition requesting approval for GMEI’s acquisition of up to 9.99 percent of iHeartMedia stock, the release states, resulted from Global’s purchasing 8.7 percent of IHRT Class A shares – a move that “caused a violation of the FCC’s foreign ownership regulations,” per iHeartMedia. Consequently, the latter’s board of directors has complied with an FCC order by imposing “temporary voting and other shareholder restrictions on GMEI.”

Keeping this point in mind – that a prominent player in the UK radio industry appeared prepared to purchase nearly half of iHeartMedia’s shares at once – multiple financial professionals have expressed optimistic views for IHRT’s long-term growth potential as of late. For instance, March saw J.P. Morgan analyst Sebastiano Petti issue a “neutral” rating and a $17 target price to the stock.

More recently, Bank of America analyst Jessica Reif Ehrlich – who set an aggressive $428-per-share Spotify stock target price in January – upped her iHeartMedia stock rating from “underperform” to “buy.” Reif Ehrlich also hiked the company’s per-share target price from $10 to $26, citing podcasting-driven digital growth potential and the perceived revenue increase that will arrive when advertising comes “roaring back over the next several months.”

Plus, analyst Siyu Li has taken a bullish stance on iHeartMedia stock, setting a target price of about $27 per share in part because of the company’s “$1.7B intangible assets impairment write-off in 2020.”