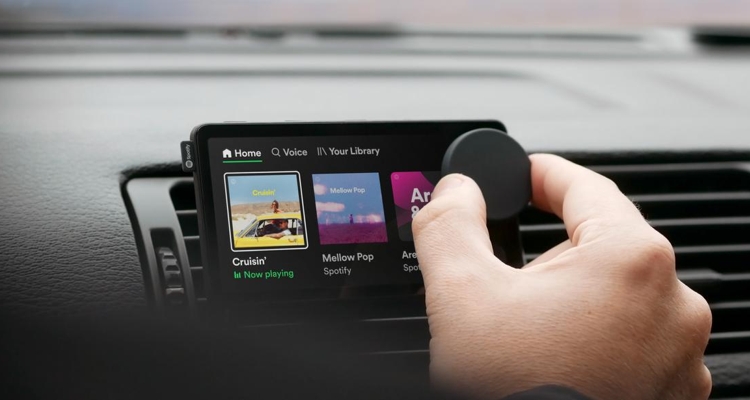 Spotify Car Thing has arrived in the United States, but there are some limitations.

The voice-controlled device is only available in limited quantities to users who must sign up. The Bluetooth-connected device allows users to control their Spotify experience without the need for a phone. It’s obviously designed for people who drive cars without an infotainment system built-in.

Spotify Car Thing isn’t something you can buy — yet. Instead, Spotify is having users sign up on a waitlist to see if you are approved. Only US customers can sign up to join the waitlist at this time and you need to be a Spotify Premium member to be accepted.

If selected, the normally $79.99 device will be available for free, just pay $6.99 shipping. Spotify says the device is an exploration, but really it’s about collecting data from people who commute. Spotify wants to know what people are listening to on their drive and that’s hard to do if they don’t have a connected car.

The device itself looks pretty sleek and stylish for what it is. It’s small and lightweight, with a big knob for selecting things on screen. There’s no speaker built-in to the device, so it really is just a Spotify remote for your car. The voice controls are a nice touch, but not anywhere near as refined as other digital assistants.

Sometimes voice controls aren’t always the fastest way to do things either. Asking Spotify to skip an unliked song vocally takes longer than just tapping the skip button. “I generally felt like I could more efficiently navigate Spotify just by using my phone at stop lights,” writes The Verge reviewer Ashley Carman.

How Does Spotify Car Thing Work

The hardware can be mounted on a car vent and pairs with a phone’s Bluetooth connection. It needs to be paired with a phone to piggy-back off of the data connection. That means you’ll be using a hefty amount of data to play music through this thing.

Spotify also notes that Car Thing can’t just play downloaded content at the time. That may come in the future, but right now it streams content from both sources. And since Car Thing doesn’t have a speaker itself, you’ll need an aux cable if you want your music to play through the car speakers.

The device also comes with a 12V adapter which can be used to power the device. It doesn’t feature a rechargeable battery, so it needs to be plugged in at all times. It ships with three different mounts, including a vent mount, dashboard mount, and a CD player mount.