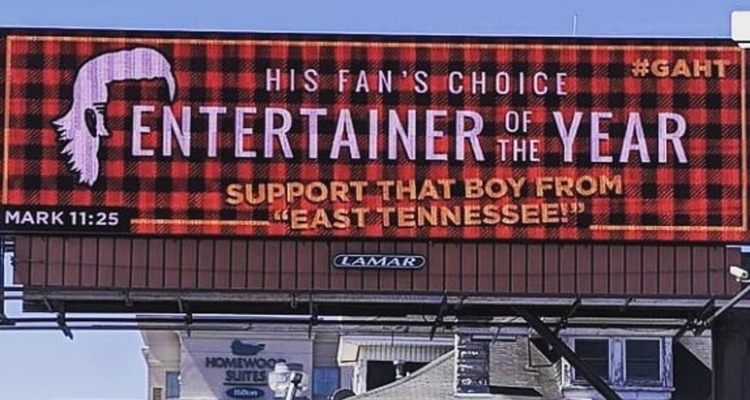 Morgan Wallen is excluded from the ACM Awards. Now, protest billboards are popping up all over Nashville.

Fans are banding together to rent out billboards all around the city. The billboard declares the singer “fan’s choice for entertainer of the year.” The billboards include a silhouette of Wallen’s mullet and the hashtag of his signature phrase, #Gaht. The Morgan Wallen billboards also include a reference to the Bible verse, Mark 11:25. The verse tells Christians to forgive those who trespass, as God would forgive them their own sins.

The verse is in response to the massive backlash sparked online when a video of Wallen uttering a racial slur went viral. Wallen has since apologized for the gaffe, asking friends and fans to support his decision to stay out of the limelight for now.

“We have spoken and you can ban him from every awards show, label, and all the events you can,” writes one Instagram account documenting the Morgan Wallen billboards around Nashville. “But just know the people have spoken, and we love our boy from East TN.”

The ACM Awards will be broadcast Sunday night on CBS. It was one of numerous award ceremonies to put Wallen on the ban list, saying he would not appear on preliminary ballots that were going out. There appear to be six billboards in total now supporting Morgan Wallen in Nashville.

“This idea was really our way of trying to ‘right the wrong’ of cancel culture,” one supporter told Music Mayhem in an interview. “We just wanted to ‘Wallen-Paper’ Nashville during the week of the ACMs to show our support for Morgan. He is an incredibly talented young man and doesn’t deserve what he’s going through right now.”

Neither Morgan Wallen nor his reps were responsible for the campaign now blanketing Nashville. They now all include a line that reads, “Paid for by Darleen Ingram and 824 loyal fans.” Wallen’s streams and sales since the incident sparked online have made him one of the most popular music figures of 2021.

Wallen may not have been in the running for Entertainer of the Year anyway – not yet. He was still scheduled to open for Luke Bryan later this year before pulling out. He hasn’t graduated to headliner status himself, though.

In a statement on Instagram Tuesday, Wallen spoke directly to his fans. “I wanted to let you guys know that I’ve taken a couple of months away and feel like I’ve really worked on myself. I’m proud of the work I’ve put in, and in many ways, thankful to have had the time to do it. I’ve needed this time off. Not only has this time revealed to me the ways in which I want to improve, but it’s also reminded me that I am still very proud of who I am and the man I am becoming.”

“I’ve found this time away to be very valuable to me in many ways, but I feel like I need a little more of it, and therefore will not be performing tour dates this summer. It means I won’t be playing festivals or the Luke Bryan tour dates.”