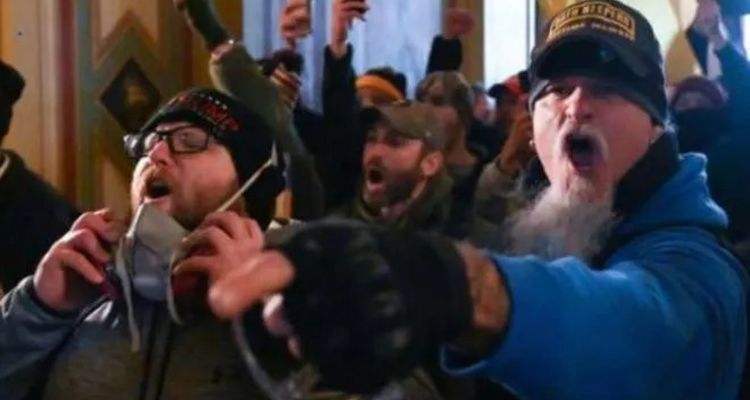 He is the first insurrectionist to enter two guilty pleas after appearing in a federal court. He was charged with felony counts of obstruction of an official proceeding and entering and remaining in a restricted building with a deadly weapon. Schaffer wore a hat that professed him to be a ‘lifetime’ member of the far-right militia group, the Oath Keepers.

Federal investigators are conducting an ongoing investigation into other Capitol insurrectionists. FBI Director Chris Wray has said it is the most extensive investigation conducted since the 9/11 terrorist attacks in 2001. During the insurrection, Schaffer wore a tactical vest and carried bear spray at the head of the crowd. Later, he says he ‘used bad judgment‘ in participating in the insurrection.

The Jon Schaffer guilty plea is the first one associated with the January 6 insurrection.

“Schaffer admitted to being among the first individuals to push past the damaged doors and into the Capitol building, forcing officers to retreat,” reads an official Justice Department press release. “Schaffer and others advanced toward five or six backpedaling USCP officers while members of the mob swelled inside of the Capitol and overwhelmed the officers. The officers ultimately deployed a chemical irritant to disperse the mob.”

The charges the Iced Earth frontman face carry a maximum 20 year prison sentence. The weapons charge also carries a maximum 10 years in prison. When he was first arrested in January, Schaffer faced six charges – four of those charges were dropped. Schaffer has been granted release from prison and has the freedom to travel throughout the continental US. He is banned from carrying a firearm, however.

His former bandmates have all pretty much quit the band over his participation in the insurrection.

Singer Stu Block, bassist Luke Appleton, and guitarist Jake Dreyer have all quit the band in the wake of Schaffer’s involvement. All three artists said they were looking forward to embarking on a new chapter in their lives and were ready to put Iced Earth behind them.