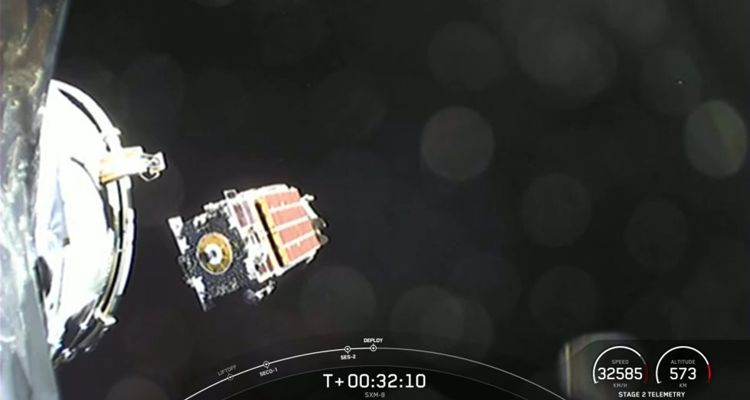 SpaceX successfully completed a night-time launch of its Falcon 9 rocket to put a Sirius XM satellite into orbit.

The two-stage Falcon 9 rocket blasted off around 30 minutes after midnight, carrying the SXM-8 digital radio satellite for its customer Sirius XM. Nine minutes after launch, the rocket’s booster returned to Earth on one of two pads located in the Atlantic Ocean.

“For this mission, the 230-foot tall Falcon 9 successfully delivered the high-powered radio broadcasting satellite Sirius XM-8 into orbit,” the official press release reads. “Built by Maxar Technologies for Sirius XM, it’s one of two satellites to be launched by SpaceX to replace outdated ones currently in orbit.”

The satellite weighed 15,432 lbs and will beam 8,000 watts of content to Sirius XM subscribers in the US, Canada, and the Caribbean. This is the second time SpaceX has launched a satellite on behalf of Sirius XM. The first launch of the SXM-7 happened in December 2020.

That satellite was declared lost after it experienced a payload failure earlier this year, during an orbit-raising maneuver. Sirius XM confirmed the failure in January. In its most recent earnings report, Sirius XM said it had $225 million in insurance coverage for the satellite, covering the launch and first year of operation. Sirius does expect to file a claim for its lost satellite and will build another to replace SXM-7.

SXM-7 was expected to replace the XM-3 satellite that launched in 2005. Sirius intended for SXM-7 and SXM-8 to replace XM-3 and XM-4 – but those satellites still remain operational with several years of life expectancy left. Officials did not disclose if there were any changes to the SXM-8 after the loss of the SXM-7 satellite.

“An evaluation of SXM-7 is underway,” Sirius XM told the SEC back in January. “The full extent of damage to SXM-7 is not yet known.” Maxar said the company’s team was working closely with Sirius XM to diagnose the problem. Neither company answered questions about which payload units failed during that January 4 launch.

Both satellites are based on Maxar Technologies’ SSL-1300 satellite bus and operate in the S-band spectrum. The satellite is outfitted with two large solar arrays and batteries for onboard storage. Deployable S-band antennas broadcast the signal to Sirius customers.

To prepare for the Sirius XM satellite launch, SpaceX test-fired its veteran booster last Thursday. Following that successful launch, the rocket was transported back to the hangar to be mated to its payload. Next, Space X will focus on launching an upgraded GPS satellite for the United States military.