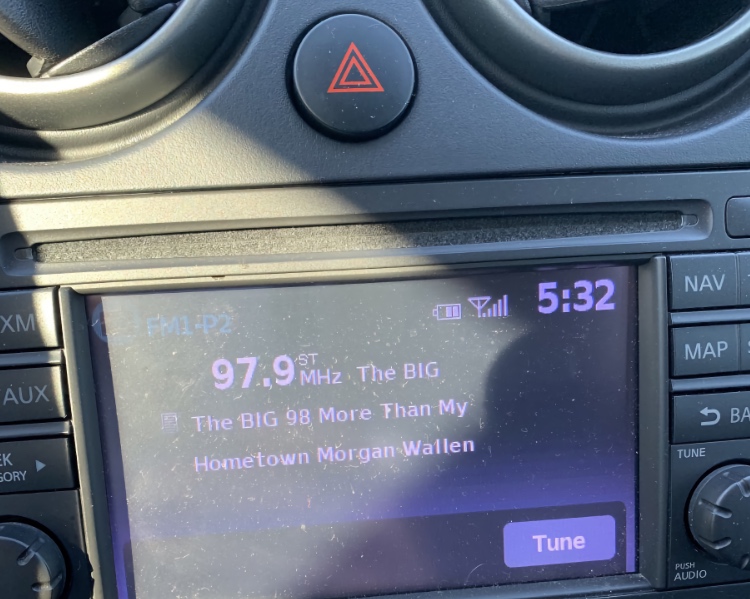 Morgan Wallen playing earlier this month on Nashville’s The Big 98 after a reinstatement by corporate parent iHeartRadio (iHeartMedia).

According to data shared by Billboard, Wallen is now receiving 2,900 spins weekly across all national radio stations, which is up from fewer than 100 plays back in February. That’s a sizable increase of at least 2,800%, with further gains likely. Of course, the drop occurred after Wallen was filmed uttering the n-word after a drunken night of partying outside of his home in Nashville, an event the prompted mass-cancellations by nearly every radio station in America. It also prompted removals by multiple awards shows, Country Music Television, Spotify, Apple Music, Pandora, SiriusXM, William Morris Agency, and others.

Indeed, the fallout for Wallen was swift, and the drop in radio plays was severe. After routinely clocking more than 10,000 weekly spins across multiple songs leading into the incident, plays of Wallen’s songs dropped into the double digits, according to the freshly-released data. Incidentally, a smattering of independent radio stations reinstated Wallen starting in March, slightly bumping up those numbers, though the impact on broader spins was negligible without the participation of mega-conglomerates like iHeartMedia.

During that period, we also reported that radio stations were facing heavy complaints from country fans — especially die-hard Morgan Wallen fans. In some cases, program directors reported that listeners threatened to stop listening to their stations entirely, while also promising to shift to platforms like Spotify or Apple Music to get their fix.

While both of those streaming platforms removed Wallen from their marquee country playlists, they didn’t remove his music. The result is that on-demand streams of Wallen’s music surged. Wallen’s latest album, Dangerous: The Double Album, subsequently spent more than ten weeks atop multiple album charts (and has never left the top 10 since).

But despite the heavy increases, Wallen is still drastically below his pre-scandal numbers.

While nearly 3,000 spins is certainly substantial for any artist, it’s still 70% below Wallen’s previous levels. That level indicates that major radio conglomerates are still testing the waters on Wallen, particularly for signs of pushback against the singer. However, in the absence of any serious backlash, Wallen’s plays will likely continue to ramp upward.

Incidentally, another big ‘radio station’ — Pandora — also ‘quietly’ reinstated Morgan Wallen back in May. The move, also reported first by Digital Music News, was likely a response to listener complaints and concerns over attrition. Pandora’s parent, SiriusXM, however, has yet to reinstate the country singer.