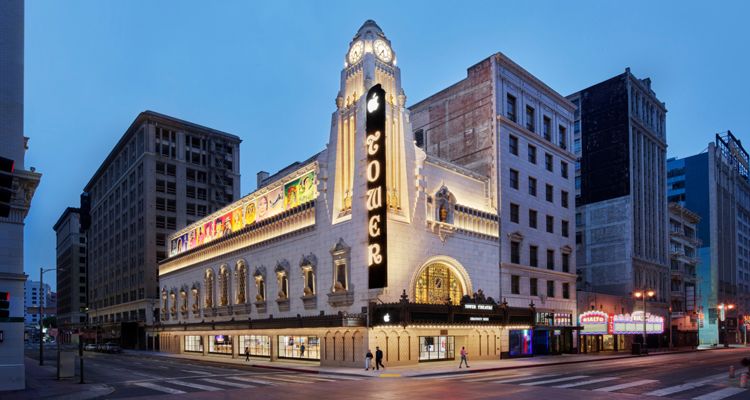 The Apple Tower Theatre retail location will open to the public in downtown Los Angeles this week.

Apple announced plans for the renovation back in 2018 with no timeline to finish. But now, three years later, the renovated retail space will open to the public. The Tower Theatre was closed for decades before Apple purchased the building. It’s smack dab in the middle of the Broadway Theatre District – a signal of Apple’s broader Hollywood ambitions.

Architect BJ Siegel, Senior Director of Retail Design at Apple, says the theater’s historic design appealed. “Most people think of our stores as the big glass boxes,” Siegel told The Los Angeles Times back in 2018. He described the Apple Tower Theatre renovation as the “upper echelon of what Apple does. It very much differs from the other Apple Stores you see in L.A.”

The Tower Theatre was home to the first theatre in Los Angeles wired for film with sound. It was designed in 1927 by architect S. Charles Lee. Apple says it will continue the legacy of technological innovation by turning it into a venue to sell Apple’s suite of products “which have transformed modern-day filmmaking, photography, and music composition.”

Apple says it collaborated with preservationists, restoration artists, and the City of Los Angeles to preserve and restore the theater’s original beauty. The Apple Tower Theatre store will open its doors to customers on Thursday, June 24 at 10 am. The store employs over 100 Apple Specialists.

Today at Apple Creative Studios LA kicks off a new global initiative for young creatives. The initiative is in partnership with Music Forward Foundation and Inner-City Arts, and the Social Justice Learning Institute. The new Creative Studios LA experience will help amplify up-and-coming artists over nine weeks of free programming at Apple Stores across LA.

Today at Apple will also offer public in-store sessions at the Tower Theatre location. There are also virtual sessions available and hosted by Creative Studios teaching artists and mentors. Anyone who wants to participate in these virtual sessions is encouraged to register at the Apple website.

The Forum inside the theater will be the home of Today at Apple, with free daily sessions led by Apple team members. Visitors who need service and support from the Apple team can visit the theater’s renovated upper levels for their Genius Bar appointments.