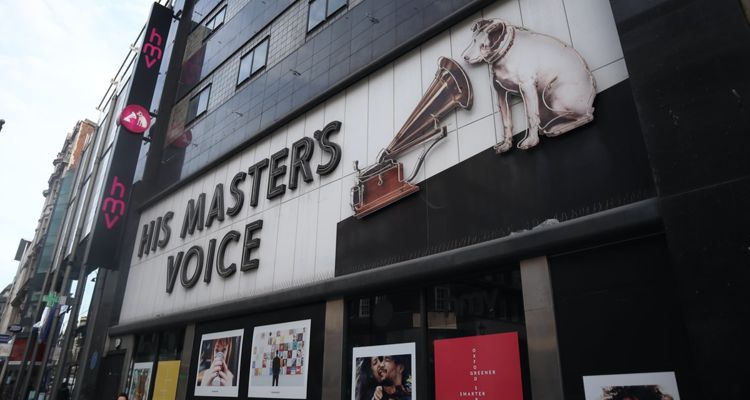 Music retail chain HMV is celebrating its 100th anniversary with some stern words for Amazon.

The 100-year-old company is celebrating its centenary through many ups and downs. The first HMV Shop was opened in a former men’s clothing store. Composer Edward Elgar was on hand for the opening – paving the way for many in-store appearances over the course of the next century.

“[In the 60s], if you wanted fashionable clothes, you went to Carnaby Street. If you wanted a record by an obscure R&B artist who’d been mentioned by Jagger or Clapton, you went to Oxford Street. Just to be seen there was a mark of sophistication,” says Alan Johnson, speaking about the influence HMV had in years past.

While that illustrious history has been saved by a Canadian entrepreneur, he has some harsh words for today’s fast retail giant, Amazon. Doug Putman bought HMV out of bankruptcy in 2019. He has unveiled plans to add up to 10 stores to its existing roster of 100. And he believes Amazon is “a very selfish business.”

“If the government does the right thing on rates and landlords are willing to work with us, it makes sense to open more,” Putman told The Mirror about opening more HMV stores across the UK. “If the government doesn’t then it will be impossible. We need to get something that levels the playing field with [online rivals like Amazon]. I want to encourage more people to open shops.”

HMVs glory days in the mid-80s and early-90s soon came to a screeching halt with digital music. In the mid-90s, there were 300 stores across the globe, from Tokyo to Sydney to New York City. The retailer continued its massive expansion until 2011, when it closed 40 stores due to failing sales.

Two years later, in 2013, HMV called in administrators to restructure the company. In 2014, the company briefly regained its crown as the top seller of music and DVDs – but it wouldn’t last.

HMV filed for bankruptcy again in 2018, which is when Doug Putman appeared on the scene. Putman was the CEO of the Canadian record chain Sunrise Records. He purchased HMV in 2019, saving 108 stores from closing. 363 Oxford Street remains closed, however.

“To me, the HMV experience is having great music playing, discovering new artists, and talking to like-minded people,” Putman told The Guardian. “Trying to be everything to everyone alienates your core customer, so you double down on what your customers actually want – and they wanted vinyl.”