tt.live ‘The All-New Turntable’ Reemerges After 8 Years to ‘Unleash the Inner DJ’

For those who remember the original Turntable, a glorious rebirth is afoot. But tt.live, ‘The all-new Turntable,’ is reemerging into a vastly different streaming landscape (and that’s a good thing).

Back in the early 2010s, Turntable was the unstoppable future of collaborative streaming and social music. The white-hot startup rallied millions in funding from names like Union Square Ventures, as well as celebrities like Lady Gaga and Kanye West. Industry heavyweights like Troy Carter, Guy Oseary, and Courtney Holt were also placing bets, though that starpower wasn’t enough to manage the iceberg ahead.

After struggling to secure proper label licensing while remaining restricted to US-based audiences, the company called it quits after a difficult 2013. “It’s an incredibly expensive venture to pursue and a hard industry to work with,” Turntable co-founder Billy Chasen conceded as the site was unplugged. “We spent more than a quarter of our cash on lawyers, royalties and services related to supporting music. It’s restrictive.”

Since that point, a lot has happened in the world of music. Emerging platforms like Spotify are now dominant industry elephants, and the app ecosystem has gone mainstream. The streaming and online music industry has exploded to include mega-players like Apple Music, Amazon Music Unlimited, Bandcamp, YouTube Music, and SoundCloud, just to name a few.

Yet somehow, something is still missing in that glorious landscape. And Joseph Perla, an original co-founder and former VP of Technology at Turntable, kept hearing this from former users. After the first version crashed, Perla enjoyed top engineering positions at Facebook and Lyft. But a gnawing sense that Turntable died too sign stirred the dormant entrepreneurial urge — and ultimately motivated Perla to reboot the idea.

The result is tt.live — aka ‘The All-New Turntable’ — which is still early-stage but garnering plenty of attention.

For those that remember the first Turntable, many of tt.live’s elements will be familiar. And like a band getting back together, the experience is sometimes sweeter the second time around. (Incidentally, that first wave of users also includes many Digital Music News readers and industry players who were involved in the first iteration, which is why we’ve joined forces with Perla to chronicle tt.live’s rebirth — and its reentry into the music landscape.)

As of now, the tt.live team offers a downloadable app, available for both iOS and Android, and a website as the company’s two core services. The app has a unique interface and several features in development that Perla believes will set it apart from competitors in the coming years. 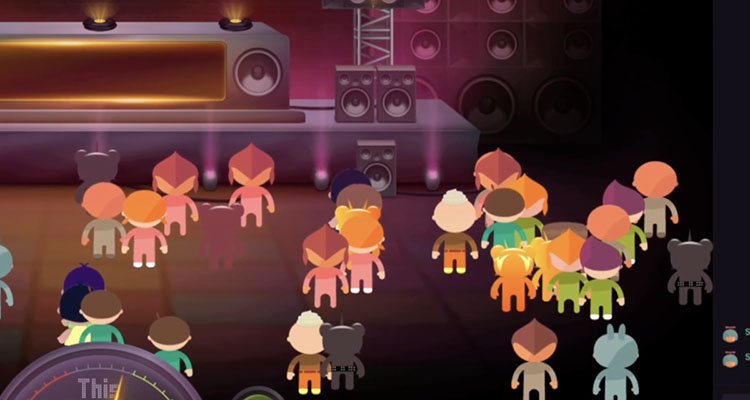 At present, the app’s beta-stage features include:

Throughout, tt.live is properly focused on community and shared DJ-led playlists. That’s always been the winning DNA for Turntable, though it’s likely that the concept was simply too early for its time. Indeed, investors widely understand that timing is critical, and recognize this as a difficult component of success. Even perfectly-executed concepts can happen years too early, with successors ultimately imitating the concept at a later point to capture the market opportunity.

In that context, one interpretation is that Perla is simply upending this process before anyone else can. But others are also seizing on the demand for more serious collaboration. Clubhouse has enjoyed a meteoric rise (and arguably, fall) during the pandemic, though its core focus was never music. But other collaborative startups, including Stationhead, are about music, which is further validating tt.live’s market bet.

Even the aforementioned Billy Chasen is also making a jab alongside tt.live. But Chasen’s Turntable 2.0 concept is still without a working app or a serious game plan, according to information gleaned by DMN.

Interestingly, pieces of Turntable have existed successfully for years. Pandora, a veteran streaming radio app, has always revolved around modified ‘non-interactive’ music streaming. Similarly, SoundCloud was driven by DJs for years, before its current mainline association with rap.

Beyond the evolution of streaming and the emergence of the app-based economy, the landscape has also shifted dramatically on the licensing front.

Perla is currently negotiating licenses with major labels Universal Music Group, Warner Music Group, and Sony Music Entertainment, among other rights owners. But ahead of those deals, Perla is testing the concept by plugging tt.live directly into Spotify Premium, Apple Music, YouTube and SoundCloud. Artists can also upload their own MP3s to test on audiences, as long as the IP is controlled. The result is the same communal, DJ-driven playlist experience, just synched to individual streaming accounts.

As a result, not only are licenses covered because the streams are delivered through APIs, but artists are also compensated for the per-stream plays. In the case of both Spotify and Apple Music, tt.live is only accepting paid subscribers, which significantly bumps the royalties paid to songwriters and artists. Overall, tt.live is looking at a prospective userbase of hundreds of millions of users, with tens of millions of tracks fully licensed — worldwide.

That’s a collaborative handshake that wasn’t possible ten years ago. And another indication that the timing is better this time around. “We want to be the social platform for Apple Music and Spotify,” Perla told us. “It’s like Discord for music.”