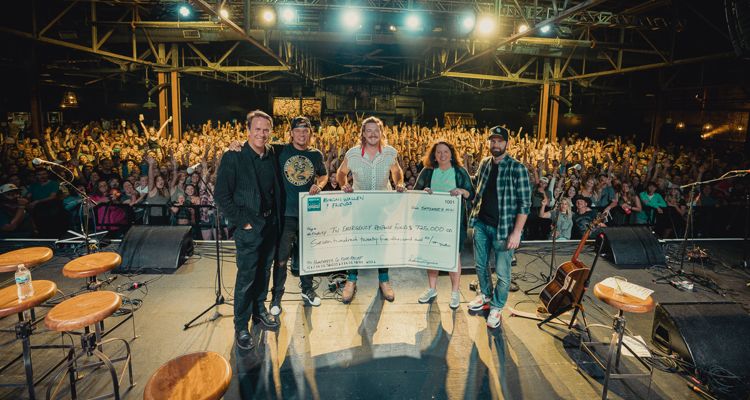 The ‘Morgan Wallen and Friends’ acoustic benefit concert was held at Nashville’s Marathon Music Works on September 8. The event raised $725,000 for The Community Foundation of Middle Tennessee and the Tennessee Emergency Response Fund to assist victims of flooding in the state.

Performers kicked off the night with breakout songs they have written and recorded. A live auction was held between rounds and then Morgan Wallen took the stage with Bentley, Hardy, and Swindell. Wallen played several of his hits including:

After the performance, Wallen invited the Vice President of Donor Services from The Community Foundation of Middle Tennessee to present the money raised.

“This is the most money raised so far for our fund, and it’s going to make a big difference,” Amy Fair said. “And when we give the money to the organizations, we’re going to let them know how many of you care about them and that’s going to mean the most.”

“Well first of all, thank you guys so much for being here,” Wallen told the audience. “Most of you probably know that I’m a Tennessee boy. I was born and raised in Tennessee and I’m proud of it.”

“The people here mean so much to me and I was watching the news and reading some articles and I read some stories that really touched my heart and made me feel like it couldn’ve been my hometown.”

So far, The Community Foundation of Middle Tennessee has raised $1.7 million to benefit flood victims and recovery. The organization is handing out grants totaling $200,000 to 11 area non-profit organizations helping those with recovery and relief efforts.

The first round of assistance will provide services like food, temporary housing, debris clean-up, animal sheltering, counseling, and mental health services. The CFMT has accepted donations from 49 different countries across the world.