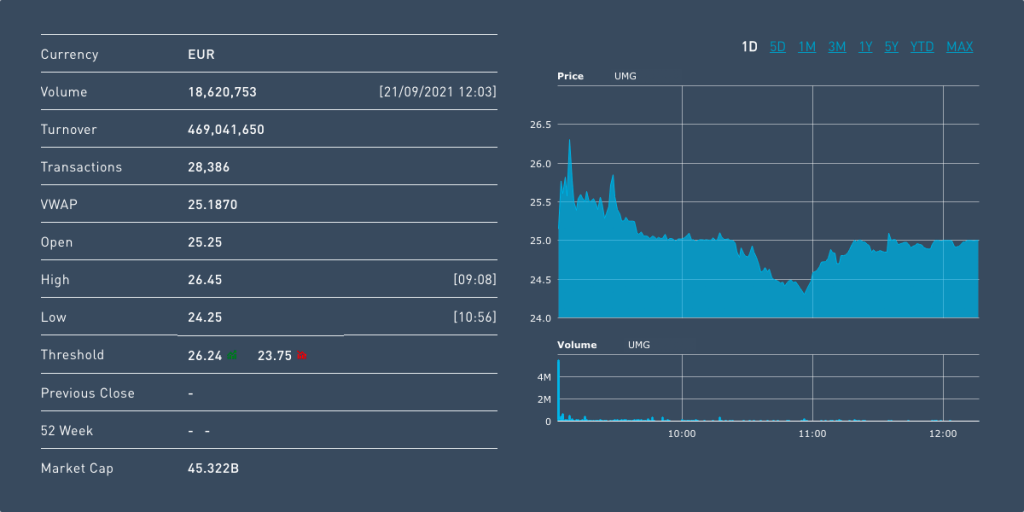 Universal Music Group’s IPO got off to a healthy start this morning, with shares debuting 35% above the initial reference price.

Shares of Universal Music Group fared well in early trading this (Tuesday) morning, with valuations debuting considerably higher than the initial reference point of €18.50 per share. Immediately out of the gate, shares jumped above the €26 mark, a 40% surge. Activity quickly cooled down, however, though UMG valuations settled around €45 billion (around $52 billion) in the early hours of trading on the Euronext exchange.

Leading up to the IPO, Universal had been Vivendi’s crown jewel property.

But now that its ownership stake is reducing dramatically, shares in Vivendi are also sinking. During the early hours of trading on the Euronext Paris exchange, shares slipped by more than 13%. That can partly be attributed to a pre-IPO runup in Vivendi shares, a process in which gains were ‘baked in’ ahead of the UMG swap.

Vivendi further confirmed that all of its shareholders would be given UMG shares. “Given their opening price of €25.25, Vivendi (Paris:VIV) confirms that the distribution in kind of UMG shares to Vivendi shareholders will be paid as planned on the basis of one UMG share for every eligible Vivendi share,” Vivendi confirmed to Digital Music News.

“The total number of UMG shares distributed represents 59.87% of its share capital. Following this transaction, Vivendi will now hold 10.13% of the share capital of UMG.”

Incidentally, the UMG bow appears to be Euronext’s biggest IPO this year.

That’s another big with for the Amsterdam exchange, which keeps luring heady IPOs following the UK’s exit from the European Union. Leading up to UMG, the Euronext Amsterdam had already counted 14 juicy IPOs in 2021 alone, while London has steadily lost its luster.

Perhaps more importantly to the music industry, the IPO strongly pegs UMG’s valuation north of $50 billion (at least for now).

Regardless of the ups and downs of this stock, today’s valuation represents a stunning, 6x+ gain in roughly eight years. Industry vets may remember that back in 2013, Japanese telecom giant Softbank offered a reported $8.5 billion to acquire UMG.

That offer, reported by the Financial Times, was rebuffed by Vivendi at the time. But lowball or otherwise, it still represents a valuation peg that fit the distressed, pre-streaming times when recorded music was under serious duress.