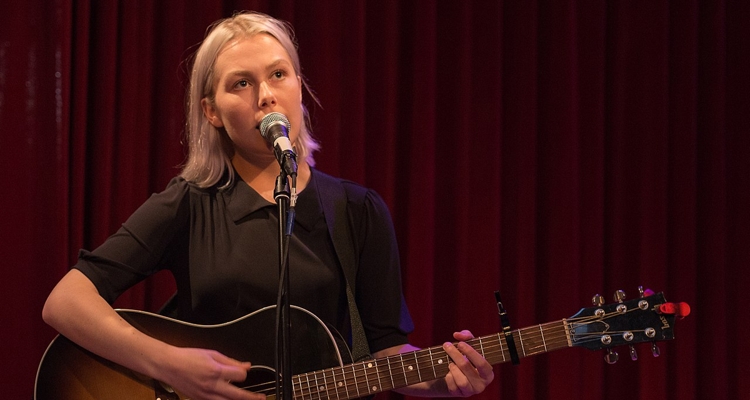 Nelson just recently submitted the 25-page-long complaint to the Los Angeles Superior Court, and Digital Music News obtained an exclusive copy of the corresponding filing. According to the firmly worded action, the plaintiff “owns and operates” a recording studio called Sound Space in downtown Los Angeles, with “numerous well-known artists and musicians” having worked with him and/or patronized his business.

Pasadena, California-born Phoebe Bridgers isn’t among these artists and musicians, however, for she and Nelson “never worked together in any capacity,” per the legal text. Rather, the plaintiff “first learned about” Bridgers through “her drummer, Marshall Vore,” the suit continues, with Vore and Bridgers having purportedly “had a prior relationship” that began when the “Motion Sickness” singer-songwriter “was in her teens.” (Vore has a songwriting credit on the latter track.)

It bears mentioning here that the plaintiff is “a respected expert musical instrument collector, distributor and reseller,” the lawsuit maintains, having recorded “a monthly average of $58,000 worth of musical equipment sales on Reverb.com over the majority of his five-year tenure” on the platform. This half-decade of selling experience has also seen Nelson complete “over 2,000 successful transactions” while receiving “a near perfect 99.99% 5-star rating with over 1,400 reviews.”

Plus, Nelson says that he “strives to promote diversity in music and intentionally seeks to work with people of color, women, and members of the LGBTQ community on music projects in order to provide equal opportunities to all musicians regardless of race, ethnicity, gender, or sexual orientation.”

Keeping these points in mind, the plaintiff “and his girlfriend at the time, Emily Bannon… began having consensual sexual encounters with defendant Bridgers” sometime in 2018, according to the text.

In any event, “Bridgers and Bannon continued their relationship even after Plaintiff and Bannon’s relationship ended in or around the fall of 2019,” according to Nelson, citing as evidence Instagram photos (as well as public appearances) involving the two.

Additionally, Bannon allegedly wrote in a March of 2020 email to the plaintiff: “‘She [Phoebe Bridgers] and I still love each other endlessly, as we did before I knew you and as we will into the foreseeable future.’”

Then, October of 2020 allegedly saw Bridgers publish “false and misleading statements” about Nelson on Instagram, writing: “I witnessed and can personally verify much of the abuse (grooming, stealing, violence) perpetuated by Chris Nelson, owner of a studio called Sound Space.”

27-year-old Phoebe Bridgers also allegedly “directed the public to Bannon’s public Instagram account” – the profile was no longer live at the time of this piece’s writing – before reposting several of the associated claims.

Included within these claims were allegations that Nelson had beaten a “‘young Latinx man to death after provoking him with a racial slur,’” “‘bludgeoned at least one other man with a baseball bat … and left him to bleed out in an alleyway,’” and “‘defrauded [a] neighbor out of an estimated $100,000-$130,000,’” the lawsuit relays.

The shocking claims likewise alleged that Nelson had created “‘fake ‘rare’ guitars to defraud collectors and museums,’” “‘robbed [a] storage unit of an estimated tens of thousands of dollars of belongings,’” and intentionally rear-ended “‘drivers of color…[before] challenging them to call the police, knowing that his white privilege would protect him from any consequences whatsoever but expose his victims to a prohibitive level of risk (of deportation, incarceration, or brutality) by forcing them to interact with cops.’”

Nelson “is informed and believes that defendant Bridgers maliciously and intentionally posted the false and defamatory statements…as part of a vendetta to destroy Plaintiff’s reputation that was enflamed by defendant Bridgers and Bannon’s sexual relationship.” (As an aside, Nelson filed a separate complaint against Bannon back in December of 2020.)

Lastly, “approximately 24 hours after posting the defamatory statements” – which the plaintiff says caused him to lose business – Phoebe Bridgers allegedly told Nelson “at Moon Juice in Silverlake, California that she felt the comments were gray, she had not seen Bannon in months, and she thought Bannon was in rehab for whip-its.”

At the time of this piece’s publishing, Bridgers didn’t look to have commented publicly on the lawsuit, which arrives about six months after she made headlines for smashing her guitar on Saturday Night Live.