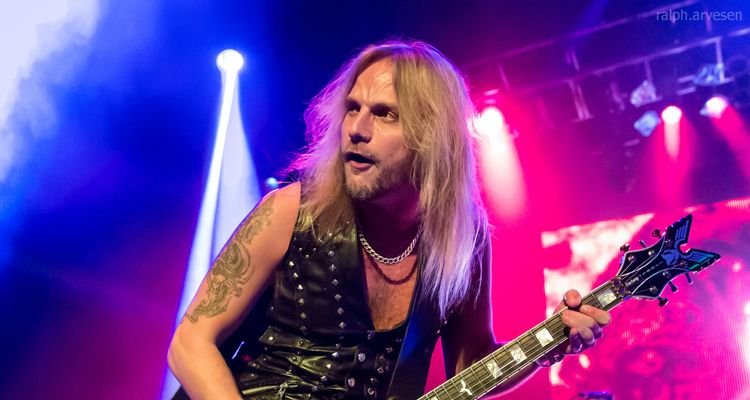 Judas Priest guitarist Richie Faulkner is recovering after being discharged from a Kentucky hospital.

The guitarist says his doctors told him he suffered an acute cardiac aortic dissection during his performance at the Louder Than Life festival in Louisville. “As I watch footage from the Louder Than Life Festival in Kentucky, I can see in my face the confusion and anguish I was feeling whilst playing ‘Painkiller’ as my aorta ruptured and started to spill blood into my chest cavity,” Faulkner says.

“I was having what my doctor called an aortic aneurysm and complete aortic dissection. From what I’ve been told by my surgeon, people with this don’t usually make it to the hospital alive.”

A University of Louisville Cardiothoracic surgeon confirms Faulkner’s close brush with death. “He was only four miles away, but miles equal minutes, and he did not have many to spare,” Dr. Siddharth Pahwa says. “Mr. Faulkner is alive today because the stars aligned. He had an outstanding emergency care team, he was close to a world-class heart center, and he was quick to recognize he needed help.”

Richie Faulkner says he has no history of a heart condition previously. He thanked his friends and family for their support and encouraged his friends to get their checkups. “We can always drive ourselves crazy with these things, but I’m still alive thankfully,” Faulkner told Rolling Stone.

“Whatever the circumstances, when watching that footage, the truth is, knowing what I know now, I see a dying man. I don’t even have high cholesterol and this could’ve been the end for me. If you can get yourselves checked – do it for me please,” Faulkner adds.

The Judas Priest 50th anniversary box set is dropping on October 15 via Sony Music. The curated boxed set represents 50 years of heavy metal music. The tour was supposed to go along with the release, but that has been postponed while Faulkner recovers. Judas Priest says a new studio album is in the works, too.