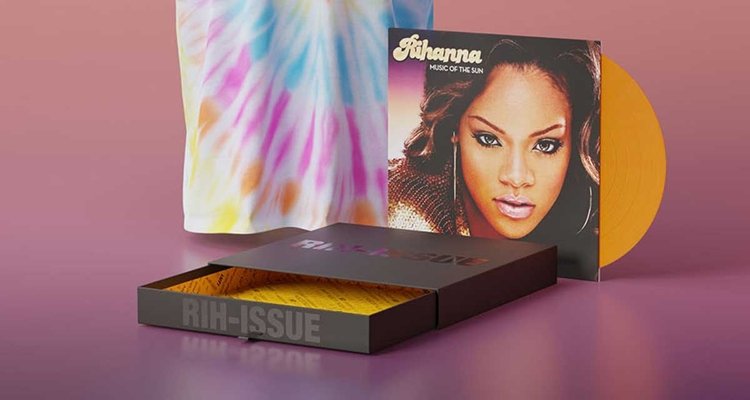 Rihanna has announced a ‘rih-issue’ of her eight studio albums in a special collection.

The pop star released a boxed set of her work five years ago – but this new set of reissues is much more unique. It features her entire discography pressed onto colored vinyl and paired with an exclusive t-shirt to match.

“‘Today’s kids will never know what viny is,’ they said!” Rihanna wrote in her announcement of the vinyl albums.

The special collection is available on ShopRihanna.com. It includes:

Each Rihanna album bundle is considered a pre-order, and orders won’t ship until November 11.

Each album in the collection is sold separately for $110-$140 with the album and the t-shirt. Rihanna’s boxed set that debuted in 2016 included all eight albums and a 186-page hardback book of all the booklets from her original CD releases.

Unfortunately, the vinyl and merch are paired together with no opportunity to buy them separately. That has led to some fans complaining about the bundles on social media, especially since Rihanna has only featured on other artists’ music since Anti dropped in 2016.

In September, the singer told fans to expect a different sound from her ninth album when it drops.

“You’re not gonna expect what you hear; just put that in your mind. Whatever you know of Rihanna’s not gonna be what you hear,” the singer said in an interview while promoting her Savage x Fenty fashion show.

“I’m really experimenting, and music is like fashion, you should be able to play, I should be able to wear whatever I want, and I treat music the same way. So I’m having fun, and it’s going to be completely different.”

Since the release of Anti, Rihanna has been featured with Kendrick Lamar on “Loyalty,” N.E.R.D. on “Lemon,” and most recently, PartyNextDoor for “Believe It.”