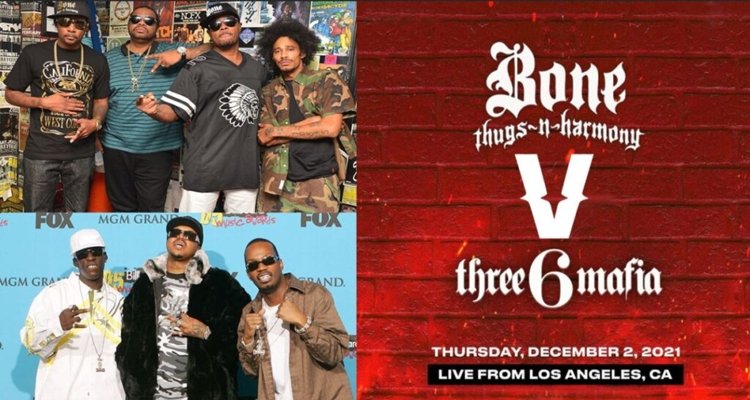 After a year of negotiation, Verzuz TV says Bone Thugs-N-Harmony will face off against Three 6 Mafia in the next Verzuz battle.

The official Verzuz TV account dropped the news on November 12, exciting hip-hop fans everywhere. “IT’S THAT TIME,” the post announcing the battle reads. You can tune in to Verzuz TV to catch the rap battle live in Los Angeles on Thursday, December 2 at 4:30 pm PT / 7:30 pm ET. Fans of the social media battles have been asking to see these two classic ’90s groups face off against one another.

Fans of both groups have been asking for this face-off for decades. The battle between the groups has been a long time coming. In the past, some short-lived beef between the groups inspired the one-off EP “Live by Yo Rep.” Both groups wanted to do a rap battle independent of Verzuz in April 2020 – but it had to be canceled.

According to Verzuz TV, Swizz Beats contacted Krazie to get the event pushed forward.

You can watch the upcoming Verzuz battle between these two legendary rap groups in a variety of ways. The Verzuztv Instagram channel hosts the battle on its live stream.

For those who want to watch the battle on a big screen, Fite TV is also hosting the upcoming Verzuz battle. It’s a premium service, but it offers a seven-day free trial of live pay-per-view events.

Music producers Swizz Beatz and Timbaland created the Instagram sensation last year during the pandemic. Verzuz battles pit two of the biggest names in music against each other via Instagram Live. It’s a friendly head-to-head battle – with no actual winner declared. But it gives fans a chance to hear their favorite hits and debate over who’s performance was better.

The group began as a horror-themed underground rap group before going mainstream. The group is from Memphis, Tennessee, and has featured many members, including Gangsta Blac, Gansta Boo, La’ Chat, Koopsta Knicca, Lord Infamous, Playa Fly, and Crunchy Back.

Today, the group comprises Juicy J and DJ Paul, in-house music producers. “Star Fly” was the first major hit for the group, opening the door to the mainstream.

Bone Thugs-N-Harmony are from Cleveland, Ohio and feature rappers Bizzy Bone, Wish Bone, Layzie Bone, Krayzie Bone, and Flesh-n-Bone. The rap group is the only one to work with 2pac, Notorious B.I.G., and Eazy-E before they died.

Ruthless Records signed the group in 1993 with the debut of their EP Creepin on ah Come Up. Their hit song “Tha Crossroads” won a Grammy Award in 1997 – it’s a tribute to the late Eazy-E.