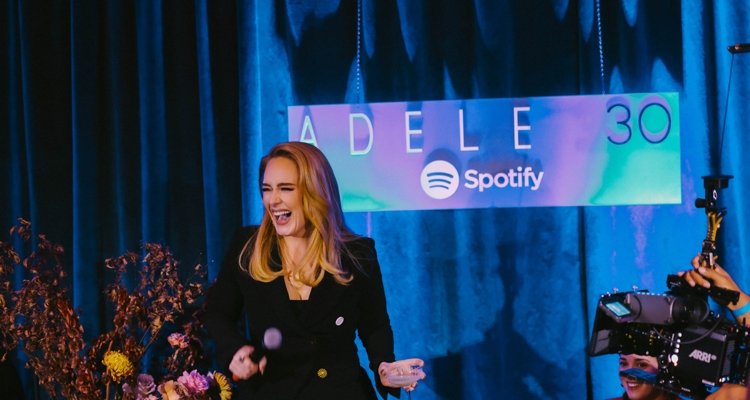 Fifty of Adele’s most dedicated fans in the LA area were invited to attend the event at Soho Warehouse in Los Angeles. Fans were treated to a surprise appearance as Adele stunned the crowd as she entered the room. She asked her fans what they thought of the album and their favorite tracks, as well as any personal experiences they wanted to share.

Adele also revealed that she was secretly watching as guests listened to the album. She says she was overwhelmed by the fan response as they danced and cried while listening. Ahead of playing the final two songs on the album, Adele teased to prepare yourself “To Be Loved” which she wrote for her son and may never sing live.

The 33-year-old singer took to Instagram to share some photos of the night with her fans. “Cocktails and crying all around,” the singer captioned her post on Instagram. Adele spoke to fans about her album while they enjoyed drinks that were named after her favorite songs.

Those include an Aperol Spritz titled “Aperologetically Adele Spritz” and a dark rum drink called “Stumbling in the Dark for a Hand ‘N Stormy.” Other themed drinks on the menu included “I Drink Wine” sprtizer, “Judy Garland Inspired Standard” and a “My Little Love Tail” lemon cocktail.

Adele previewed 30 just one night after her ‘One Night Only‘ concert aired on CBS. The special was recorded outside the Los Angeles Griffith Observatory, with several celebrities in attendance, including Lizzo, Drake, James Corden, and Melissa McCarthy. The 300-person audience also included Adele’s ex-husband Simon Konecki and their 9-year-old son Angelo.

“The songs [were] about being yourself and not caring,” one source told Page Six. Adele also sang cuts from her 2008 album 19 that she’s never done live before, with hids from 21 and 25 also included in the set.