Drake Turns Down His Grammy Nominations — So What’s Next for ‘Music’s Biggest Night’? 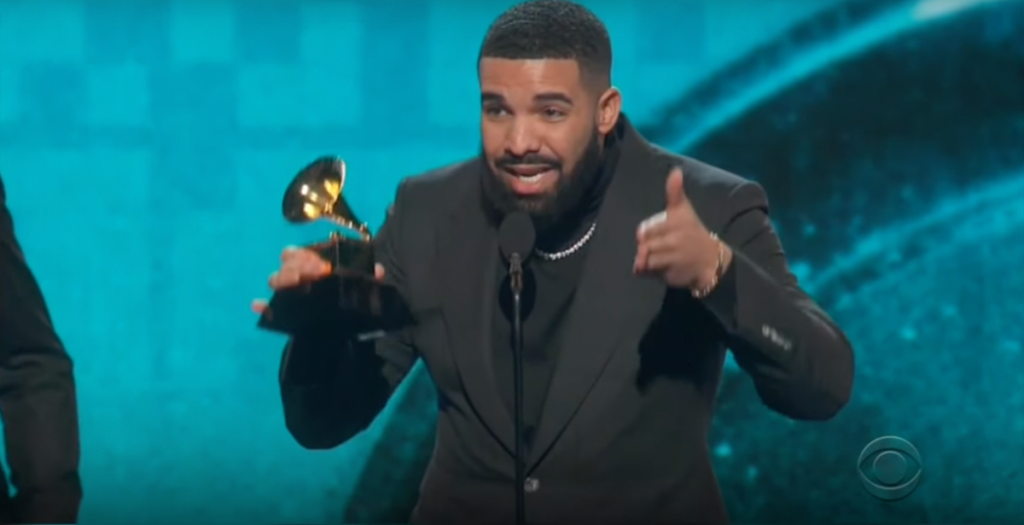 Drake before getting cut off during his 2019 Grammy Awards speech: “If there’s people who have regular jobs who are coming out in the rain, in the snow, spending their hard-earned money to buy tickets to come to your shows, you don’t need this right here.”

Drake has now taken the highly unusual step of rejecting his Grammy nominations. So what does this mean for the music industry’s biggest awards show?

It’s a move that would seem unthinkable to most artists. But earlier today, Drake took the extremely unusual — and potentially unprecedented — step of actually turning down his latest Grammy nominations.

Even more interesting is that the Recording Academy, which oversees the Grammy Awards, complied with the request. Accordingly, Drake is no longer a 2022 Grammy nominee.

According to Variety, Drake’s management firm specifically requested that the Recording Academy remove the rapper’s name from consideration for Best Rap Album (for Certified Lover Boy) and Best Rap Performance (for “Way 2 Sexy,” which also features Future and Young Thug).

For the other nominees in those categories, this is a good development — at least from the standpoint of winning an award. Now, the pool of nominees in those categories will shrink. “Rather than giving a nomination to the recipients of the sixth-most votes… the voting for those two rap categories will go forward with just four nominees, presumably because the voting period already has begun; Grammy ballots were posted for voting members on Monday morning,” Variety reports.

Variety also speculated that Drake didn’t even submit either Certified Lover Boy or various songs for Album, Song, or Record of the Year consideration.

Drake hasn’t stated why he ‘returned’ the nominations. But despite the unexpected step, it isn’t a complete surprise. Drake has been a huge critic of the Grammys and Recording Academy for years. And part of that is rooted in Drake’s repeated snubs.

So how many Grammys does Drake have, anyway?

Sounds great, except when you consider that Drake has been nominated forty-seven times since 2010. Certainly, no artist is entitled to win a Grammy, but that conversion percentage is shockingly-low considering Drake’s cultural impact. It’s also shockingly low considering that Drake is easily one of the most influential rappers in the world — and his impact certainly goes beyond rap.

That is also a frustration that Drake has expressed about the Grammys process. After all, why is Drake only winning rap-specific awards, when rap is such a massive genre?

In 2019, Drake vented those frustrations after winning Best Rap Song. In a speech that was ultimately cut off, Drake sharply questioned whether artists should be pining to win a Grammy. “Look, the point is, you’ve already won if you have people who are singing your songs word for word, if you’re a hero in your hometown,” Drake declared in his anti-speech. “If look, if there’s people who have regular jobs who are coming out in the rain, in the snow, spending their hard-earned money to buy tickets to come to your shows, you don’t need this right here. I promise you, you already won.”

But perhaps Drake’s lightly-simmering beef with the Recording Academy hit a broil when the Grammys refused to nominate The Weeknd last year.

The Weeknd Grammy snub of 2021 was one of the biggest snubs in Grammy history.

So what happened? Somehow, the Grammys nomination committee refused to recognize the Toronto-born artist despite the immense success of The Weeknd’s After Hours album. The album achieved serious chart success with songs like “Save Your Tears” and “Blinding Lights,” the latter of which was easily one of the biggest songs of the year. The Weeknd is clearly a commercial success, though his cultural impact in both music and broader entertainment made the snub hard to stomach.

In some senses, Grammy snubs are part of what makes the show so exciting and controversial. But instead of dying after a round of water-cooler chats on Monday, The Weeknd’s snub may have created a lasting impact on The Grammys’ reputation and importance. This snub felt different — and created a ripple effect for Drake.

Last year, Drake called for the Grammys to be replaced in the wake of The Weeknd’s snub. “I think we should stop allowing ourselves to be shocked every year by the disconnect between impactful music and these awards and just accept that what once was the highest form of recognition may no longer matter to the artists that exist now and the ones that come after,” Drake expressed on Instagram.

“It’s like a relative you keep expecting to fix up, but they just won’t change their ways. The other day I said The Weeknd was a lock for either Album or Song of the Year along with countless other reasonable assumptions, and it just never goes that way. This is a great time for somebody to start something new that we can build up over time and pass on to the generations to come.”

In the wake of the high-profile snub, The Weeknd declared that he would boycott the Grammys forever. After slamming the Recording Academy as “corrupt” and rife with “secret committees,” the artist officially wrote the Grammys off. “Because of the secret committees, I will no longer allow my label to submit my music to the Grammys,” he specified.

The Weeknd appeared to leave the door open for future reconciliation. But according to details tipped to Digital Music News, The Weeknd may also reject three nominations received for the 2022 Grammy Awards, specifically for guest artist and songwriter roles.

Obviously, losing the participation of two of the world’s biggest musical acts is bad news for the Grammys. But that’s hardly the biggest problem confronting the Recording Academy.

Grammy ratings have been slipping for years, most recently hitting an all-time low.

Most recently, the 2021 Grammy Awards posted disastrous viewership and overall ratings results. The show posted a 2.1 rating in the coveted 18-49 demographic – a 61 percent decline from 2020’s 5.4 rating.

In total, 8.8 million fans tuned in for the 2021 Grammys ceremony, per Adweek, despite performances from Cardi B, Taylor Swift, Billie Eilish, Post Malone, Harry Styles, BTS, and others. The viewership total was the lowest of any Grammys telecast to date, including 2020’s controversy-heavy event (which attracted 18.7 million watchers) and the 2006 Grammys, which had previously laid claim to the sparsest-audience distinction with its 17 million watchers.

In fairness, the Grammys aren’t alone. We’ve been monitoring severe drops for several music awards shows, as well as shows outside of music. For example, in the sports world, leagues like the NBA have witnessed scary ratings plunges, and even the Super Bowl posted dramatically low ratings in 2021.

Part of those declines can be attributed to changes wrought by the global pandemic. But the Grammys face some enormous challenges as they attempt to recover lost ground. Audiences are rapidly shifting away from the staid, linear string of performances and back-slapping that have defined the Grammys for decades. People aren’t sitting around eating popcorn while waiting for the next acceptance speech. And they haven’t been doing that for years.

Which raises an important question: how much effort should artists expend on winning a Grammy?

For Drake, one of the largest artists in the world, the calculation behind snubbing the Grammys is different. But what about everyone else?

The Grammys still produce a spike for artists, and few would benefit from returning their nominations. Still, some may be disappointed with the ultimate impact of a Grammy nod. Or, in the case of musician and bandleader Jon Batiste, eleven nominations.

That’s right: on November 24th, the Grammys doled out eleven nominations to Batiste, the most of any artist. The impact, however, was less meteoric than you’d imagine.

According to Chartmetric, Batiste enjoyed a quick surge in engagement across 16 different platforms tracked by the analytics company, including Spotify, Apple Music, TikTok, Twitch, Wikipedia, and more. The spike quickly subsided, however, landing on a somewhat elevated position.

The result is surprisingly muted for 11 nominations. Of course, Jon Batiste probably isn’t planning to cancel his nominations. But the results suggest that “Music’s Biggest Night” is packing a smaller punch than ever — and is witnessing a severe erosion to its relevance.

In that context, Drake’s decision to snub the Grammys back may have been an easy one to make.