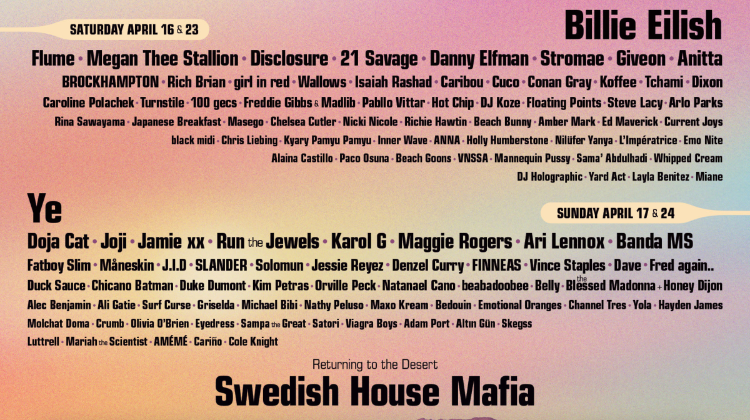 Kanye West, aka Ye, is a major headliner at Coachella 2022 (Photo Credit: Coachella)

Kanye West — aka ‘Ye’ — recently threatened to quit Coachella after Billie Eilish allegedly slighted Travis Scott. Now, Coachella attendees are the ones threatening to boot the rapper, while the Grammy Awards have already cut the cord.

Kanye’s antics are going to the crazy place — and major events and festivals are reacting. Over the past few days, a change.org petition to remove Ye from Coachella has steadily gained steam, with over 9,500 24,000 signatures as of this writing.

At 10,000 signatures, change.org notes that the petition is ‘more likely to get a reaction from the decision maker!’ At 25,000, the site proclaims: “this petition becomes one of the top signed on Change.org!”

Meanwhile, Kanye West has been removed by the Grammys — no petition required. The Recording Academy has confirmed the removal to multiple media outlets, based on erratic and threatening behavior from the rapper. One of those receiving taunts was Trevor Noah, host of the upcoming event in Las Vegas.

West has been nominated for multiple awards, including Best Rap Album, but will not be present. A formal statement by the Grammys coordinator may be forthcoming.

As for Coachella, Ye’s rough-and-tumble history with festival goes back a few years.

In 2019, Kanye was set to perform at Coachella alongside Justin Timberlake. But he pulled out after getting into a disagreement with AEG Live (the company that produces Coachella).

Rumors suggested that Kanye demanded that the festival be moved to a “more mud-free location” with a dedicated dome for the rapper’s performance. When AEG predictably refused, West backed out (Timberlake backed out for entirely different reasons).

Fast-forward to the 2022 event, and Ye is also threatening pullouts and making plenty of noise before showtime.

The person who started the petition, identified only as ‘Kim Pete,’ pointed to Ye’s spurt of erratic and outlandish behavior over the past few weeks.

“We have watched Kanye harass, manipulate, and hurt Kim, Pete, and others for over a year now,” Kim Pete states. “No one seems to want to stand up to him, and the ones that do, he puts under fire as well. Most recently, he has been threatening actual bodily harm on others. This is ridiculous that he is allowed to freely do this. Coachella (along with other brand names that are still working with him) should be ashamed of themselves and should not be giving him any more of a platform. Please sign & share!”

And regardless of whether Ye decides to show up  or not will have little impact on the show’s stature or financial standing. That said, festival organizers are likely preparing for some logistical headaches.

Fans are likely similarly numb to the Kanye rolling circus. A Ye no-show would be disappointing but likely shrugged off by fans, especially given the depth of artists playing the comeback festival.

After a COVID-induced hiatus, the Coachella Valley Music and Arts Festival will be held for back-to-back weekends starting April 15th in Indio, CA. Both weekends sport the same bill and quickly sold out as fans clamored to restart the legendary event.