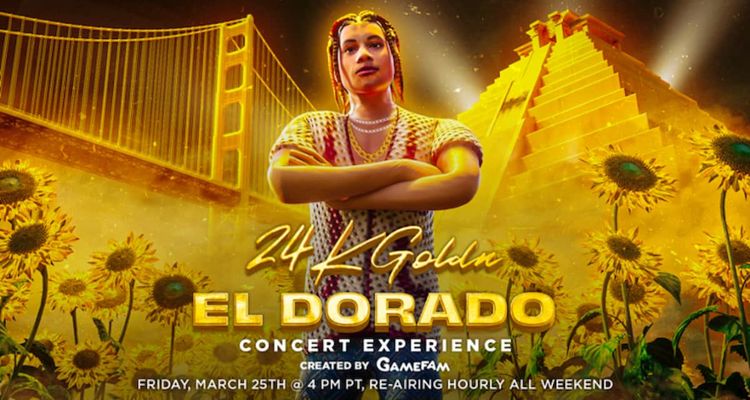 Roblox and Sony have teamed up for a virtual concert featuring 24kGoldn held inside Roblox.

The gaming experience is aimed at Roblox’s more than 55 million daily active users. Roblox wants to expand beyond just hosting game modules – it wants to throw its hat into the metaverse ring aimed at pre-teens and tweens.

The 24kGoldn El Dorado Concert Experience is happening inside Roblox on March 25, 4 pm PT. The concert experience features a complete storyline, pitting 24kGoldn against an evil version of himself in a battle to save the fictional city of San Dorado – a mash-up of San Francisco and the mythical city of El Dorado. 24kGoldn will take fans through a huge version of the city, performing at iconic locations to give each song a unique stage.

The 24kGoldn concert inside Roblox is the rapper’s first public performance of his new single, “In My Head.” While on stage, he will also perform “Mood,” “Valentino,” and other hits from his 2021 debut album El Dorado. “I grew up on Roblox and have been a big fan my whole life,” says 24kGoldn.

“It’s been amazing to be a part of the full experience to make this virtual concert come to life,” the artist continues. “From coming up with the storyline and transforming my hometown to designing verch, I wanted to give my fans a one-of-a-kind experience.”

Roblox has also released a look at the pre-concert quests fans can do to earn badges for verch – virtual merchandise. Fans who want to participate can access these quests via portals to other Roblox experiences where they can collect badges to redeem for prizes. Each day, two additional portals will open, and fans who collect all the badges unlock a special limited-edition emote after the premiere performance.

“It was so exciting to see how passionate Goldn was to extend his creative vision to Roblox, where he also grew up playing,” Jon Vlassopulos, Vice President and Global Head of Music at Roblox told Venture Beat.

“Roblox is changing the game for artists, freeing them to express themselves in a way they can’t do on any other platform and allowing them to connect with millions of fans who would never be able to see them play in the real world,” Vlassopulos adds. Virtual concerts took off in a huge way during the pandemic, but events like this are here to stick around.

The 24kGoldn El Dorado Concert Experience was created in collaboration with GameFam. The experience will re-air every hour after its premiere this weekend, with the last show on March 27 at 11 pm PT.