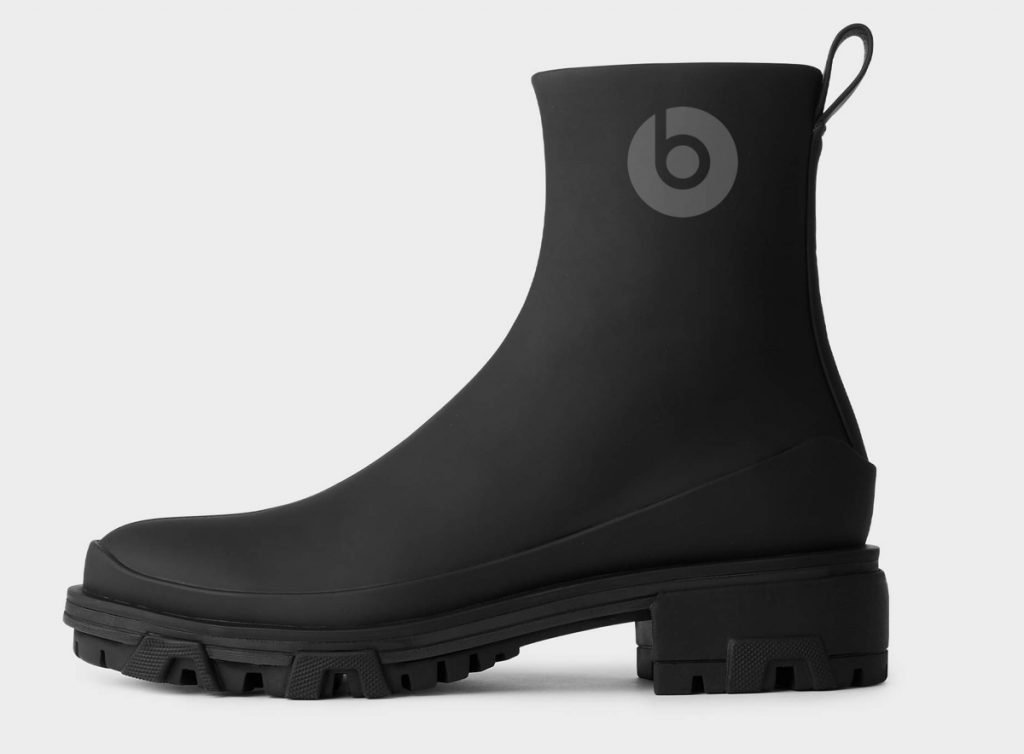 For decades, Apple has defined tech fashion with its svelte computer, phone, and tablet designs. Now, the company is taking things further with a ‘Boots by Dre’ fashion footwear line, complete with Bluetooth connectivity, motion-sensing capabilities, and an optional vibrating heel-bass woofer.

Apple is now taking its storied ‘Beats by Dre’ headphone lineup into an unexpected direction: footwear. In a private preview session for members of the media this morning in Cupertino, California, the tech giant officially unveiled its ambitious ‘Boots by Dre’ fashion footwear line.

The ‘Boots by Dre’ boots will feature a tough, rubberized exterior that houses multiple tech-connected features, including Bluetooth connectivity, motion-sensing discs in the sole of the boots, iOS-compatible GPS tracking, embedded Apple AirTags to prevent loss or theft, a USB-C charging port, a power on/off button, and an optional vibrating subwoofer in the heel that also doubles as an iPhone vibrating ringer. There’s also a dedicated Boots by Dre iOS app.

Additionally, buyers will also receive a pair of Beats by Dre Powerbeats Pro earbuds, which can be tucked into a specialized storage compartment also located in the heel of the boot. The compartment remains sealed until opened by a successful fingerprint scan on the Boots by Dre app.

The result, according to Apple, is the most sophisticated boot every released.

Apple will initially retail its Boots by Dre boots for $679 a pair, which includes a 6-month free trial to Apple Music and the aforementioned Beats by Dre Powerbeats Pro earbuds.

Boots by Dre will be available starting July 1st at all Apple Stores in the United States. Internationally, the boots will be rolled out in Europe in August, followed by a September rollout in Asia. Rutherford said that Apple Stores were bracing for lines out the door, similar to earlier releases of iconic iPhone models.

Initially, Boots will only be available in black, according to the company. By 2023, the company plans to release its boots in ‘five stunning finishes’ — sierra blue, graphite, gold, silver, and the all-new olive green (pictured) — which matches the colors available on the iPhone 13 Pro and iPhone 13 Pro Max. 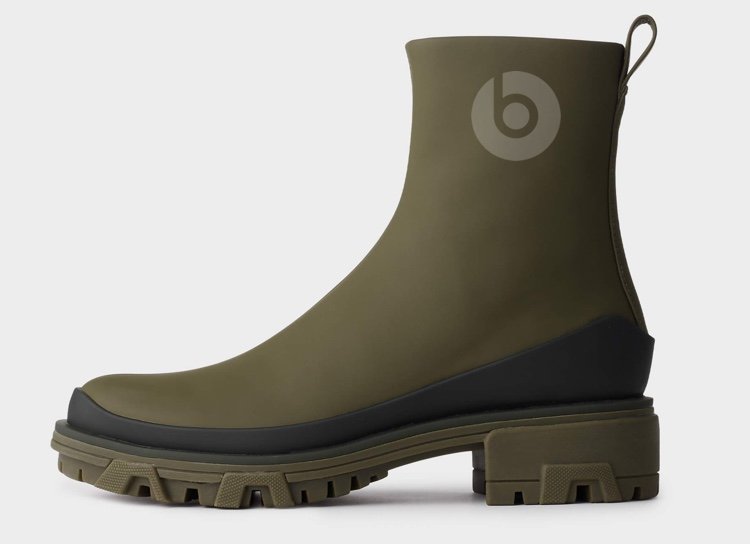 The iPhone 13 match isn’t an accident, according to Rutherford.

Once ‘booted up,’ the Boots by Dre boots instantly connect to the wearer’s iPhone. Immediately, the iPhone starts tracking motion using its AirBoot technology, which calculates the energy exerted to move the heavier-weighted Boots by Dre boots. Additionally, the user’s walking pace can be fed into an iPhone-housed Apple Music account, which selects the appropriate playlist using both pace, location, and recent places visited.

Once removed, the Boots by Dre boots power down automatically, which saves the step of turning the boots off. Then, approximately 15 minutes prior to being worn, the Apple boots cue up a favorite playlist, and warm the interior if selected in the Boots by Dre iOS app settings.

But perhaps the most innovative feature is the optional heel-enclosed vibrating subwoofer.

Paired with an Apple Music account and the Boots app, the vibrating subwoofer delivers a subtle bass vibration that matches the music. The heel-enclosed subwoofer is designed to create a full body musical experience. The vibrating heel can also be used to alert the walker of an incoming call, text message, or alerts from TikTok, Instagram, and Apple Music. Paired with an iPhone and Apple Watch, that means that missing a phone call or alert from your mother is now virtually impossible.

Also included is a dedicated anagram featuring the initials of the buyer on the sole of the boots. Those that forego the anagram step will be given a default BOOT anagram.

According to Rutherford, the Boots concept has been under development since Apple purchased Beats by Dre for over $3 billion in 2014. “Apple didn’t just buy a headphone company,” Rutherford subsequently told Digital Music News. “We bought a lifestyle revolution — now we’re proud to start realizing that vision from head to toe.”