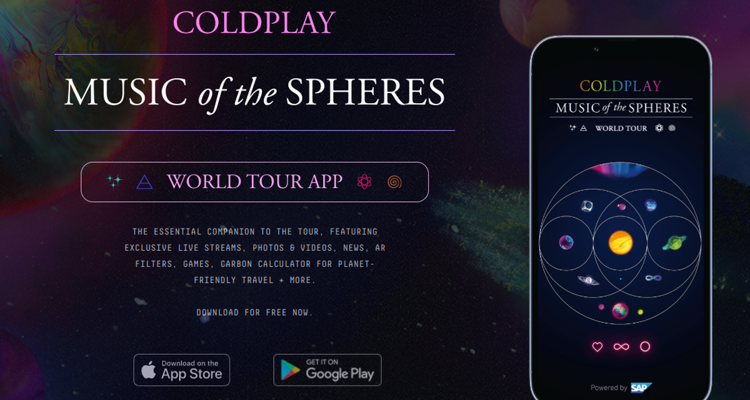 Coldplay has released a new ‘Music of the Spheres’ mobile app for iOS and Android. The band says it’s essential to experience the tour with exclusive live streams, videos, photos, and AR filters for fans to create their own music videos.

But the Coldplay app also raises awareness about climate change, and what music fans can do to make an impact. It includes a carbon calculator so fans can find sustainable ways to travel to and from the concert. Fans who utilize the tool can earn a 10% discount on their ticket prices.

“It helps you to become part of the environmental side of the show by looking at the cleanest and greenest way you can get to a concert and home again and offset those emissions,” says Coldplay’s lead vocalist, Chris Martin. The app directs concert attendees to nearby public transit locations.

The ‘Music of the Spheres’ app was created for the band by a company called SAP. It has been downloaded more than 10,000 times on Google Play. “One of the key insights that Coldplay told us from the very beginning, is we want to be subtle and not preachy,” says SAP Senior Vice President V. R. Ferose. “We don’t want you to feel guilty about anything.”

“We do very gentle nudges on the app,” Ferose continues. “If you say you’re traveling alone, the app asks ‘why don’t you travel with someone else?'” Coldplay says it will help offset carbon emissions by planting a tree for each ticket sold while taking other steps to minimize fans’ impact on the environment.

“Good behavior is something that we all want to be associated with,” adds SAP’s Ferose. “So I think it’s a matter of a band like Coldplay doing it encourages everybody else to do it.” Coldplay was the first act to open at Seattle’s newly renamed Climate Pledge Arena in September 2021.